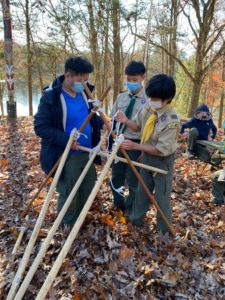 Adhering to all safety precautions and guidelines, Boy Scout Troop 10 of Great Neck recently returned from an overnight camping trip at Camp Bullowa, east of Harriman State Park. 30 scouts and 8 adult leaders made the most of a beautiful, cool, mostly sunny weekend in November. Four patrols of around 7 boys each supervised by older scouts applied their lashing skills to build 4 gigantic ballistas (catapults) made of 6 foot staves, ropes and pans. A catapult competition ensued using tennis balls as ammunition.

The boys also reviewed basic skills such as knowledge and care of the American Flag during their flag ceremony; safety and use of knife, hatchet, ax and saw by cutting their own logs. Then the senior scouts led the junior scouts to practice fire building and fire safety. Webelos Cub Scouts Pack 178 joined them for the day and stayed through dinner. The scouts made two large cooking fires with the logs and branches they had chopped and gathered.

Before the trip, each patrol created their own menus and delegated 2 scouts to shop and prep for their patrol’s meal. Traditionally, scouts ate very well on camping trips. They are required to develop cooking skills by preparing entrees and desserts from scratch and this dinner did not disappoint. In the two large open fires, each scout and leader seasoned and cooked their own foil wrapped entrees composed of ground beef or sliced chicken breast together with diced potato and cubed vegetables. Individually foil wrapped bananas, marshmallows, and chocolate chips melted in the hot embers made for a delicious dessert.

The big fires burned for hours as the scouts and leaders sat around for warmth and fellowship. They even had the opportunity to practice the scout motto “do a good turn” by putting out an abandoned camp fire left by other campers. The night was clear, and Mars was high in the sky.

Due to the pandemic, each scout slept in his own tent but siblings were allowed to share. At the crack of dawn, the scouts arose to wondrous frost crystal formations which blanketed the entire campsite due to temperatures dropping to 30 degrees overnight; but assigned boys still diligently filled and carried gallons of water from the source half a mile away in order to cook breakfast on camp stoves. After they picked up every bit of trash in the site by walking in line formation to “leave no trace”, the senior boy leaders held a brief meeting to review the whole trip including what was done well and what could be improved. The boys carried their gears half a mile to their parents’ cars and all returned home by noon with special memories to cherish.

Troop 10 meets on Sundays at 9:30 a.m. If you are interested to join, please contact Dr. Dwight Rosenstein at djrosenstein@gmail.com.