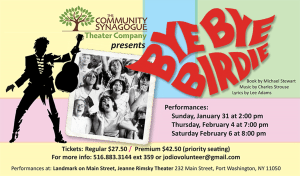 Dig out your poodle skirts and saddle shoes and return to a simpler time for the Community Synagogue Theater Company’s musical production of Bye Bye Birdie at The Landmark on Main in Port Washington on Jan. 31, Feb. 4 and Feb. 6.

Inspired by Elvis Presley, Bye Bye Birdie is set in the swinging ’60s when teen idol superstar Conrad Birdie is drafted into the army. Birdie’s manager Albert and his secretary Rosie cook up a scheme to have Birdie sing their new hit song and get one last kiss from a lucky teenage fan on The Ed Sullivan Show.

In this production, Conrad Birdie is played by Roger Telsey, who teaches physical education at JFK Elementary School and coaches high school baseball and basketball in Great Neck. Mrs. Doris MacAfee will be played by Kim Kaiman, executive director for the Town of North Hempstead Business & Tourism Development Corporation and resident of Great Neck.

“For as long as I can remember, I’ve loved Broadway shows. In college, I did
several main stage productions that made many people question why I was a physical education major and not a music theater major,” said Telsey when questioned about his interest in musical theater and how he ended up playing the iconic king of rock and roll.

The theater bug seems to run throughout Telsey’s family; his son Steven, currently studying music theater at Elon University in North Carolina, had “an incredible high school career at Great Neck South High School playing lead roles in Cabaret, Tommy the Musical and The Drowsy Chaperone, as well as some full-length operas put on in the school.” Telsey’s other son, Michael, will actually be playing Hugo in Bye Bye Birdie alongside his dad. 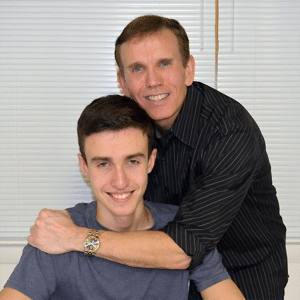 “Michael has no acting experience because he plays varsity baseball and volleyball. And I haven’t done any acting for quite a while, so we are having fun discovering musical theater. We are having a blast doing this show together,” said Telsey. “I am truly looking forward to showing my son what his ‘old man’ can do,” adding, “playing a character like Conrad is going to be an awesome experience.”

Kaiman, playing the mother of Kim MacAfee, the lucky teen who has been chosen to give Conrad Birdie his farewell kiss, is no stranger to acting; she hosts a cable-TV show called Business Buzz that can be seen locally on Cablevision and Verizon FiOS, appeared as Mame Dennis in Mame, was in two commercials for Time Warner Cable NYC and starred in an episode of The Mind of a Murderer on Investigation Discovery.

Kaiman has appeared on the Landmark stage twice before: she portrayed Sandy in Port Washington Play Troupe’s production of Grease in 2013 and Ginger Brooks in The 1940’s Radio Hour. Kaiman is married with three children, and when asked how she does it all, remarked, “Balancing theater, work and family is like having another child; you don’t think you can handle one more thing to do and then the child is here and your heart explodes.”

More than 35 actors will be performing with special guest appearances by local personalities. A full orchestra will bring hit songs like “Put on a Happy Face” and “Kids” to life. Bye Bye Birdie will be performed at The Landmark on Main, 232 Main St. in Port Washington on Sunday, Jan. 31, at 2 p.m.; Thursday, Feb. 4, at 7 p.m.; and Saturday, Feb. 6, at 8 p.m. Tickets cost from $27.50 to $42.50 and are selling fast. For more information on tickets, advertising or sponsorships, visit www.commsyn.org, www.facebook.com/thecommunity synagoguetheatercompany or call 516-883-3144, ext. 359.