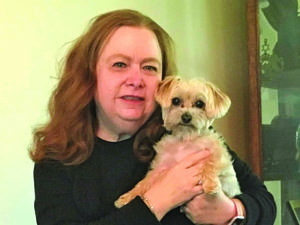 A Great Neck South High School alumna desperately needs a kidney donor. Gail Korkhin ’79 has a kidney functioning at around 10 percent, which resulted after she took a certain medication for a long-term medical issue.
While Korkhin initially thought that a family member could donate a kidney to her, she soon found out it would not be possible. For this reason, she is seeking a transplant from a stranger.
“I thought someone [in my family] would match, but nobody in my family is healthy enough to donate,” she said. “A living donor kidney lasts approximately 20 years while a cadaver kidney only lasts about 10 years. Since I have B positive blood, my wait for a kidney is twice as long.”
She said that the entirety of the process—waiting for a kidney and facing dialysis—is an extremely stressful and scary process for her to think about and experience. Neither of these options happen to be a cure, but rather a treatment. Many of the physical activities that Khorkin consistently participates in such as walking, will be more restricted if she goes through with the transplant surgery and she will also have to use anti-rejection drugs for a lifetime.
Luckily, to help her through this tough time, Khorkin reached out to several of her high school classmates with whom she has stayed friendly with since graduation. She reconnected with Clara Pomerantz, Peter Mones, Patricia Clark and Myra Michael. Each of these individuals has helped her in the challenging process to find a donor.
“I had kept in touch with Gail Khorkin from time-to-time over the years,” Pomerantz ’79 said. “She reached out to me about a month or two ago through [Facebook] messenger, explaining her life-threatening situation and her search of a living kidney donor. She explained a medication she had been taking for nearly 40 years has destroyed her kidney.”
Pomerantz mentioned that she, as well as her three other classmates, meet periodically on Zoom to brainstorm methods to help Khorkin.
In addition to Pomerantz’s efforts, Mones used his synagogue’s newsletter to spread word about Khorkin’s medical needs, hoping that he and his fellow congregants at The City Congregation for Secular Humanistic Judaism can make a difference.
To gain more support and attention, Clark sent an email to fellow SHS ’79 graduates, urging each of them to contribute to Khorkin’s cause. Since the email chain was sent, several alumni have shown their support for her urgent medical issue.
“I sent an email blast to Great Neck South Class of 1979 classmates on June 25, advising of Gail’s serious health situation and options to help our classmate. Options to help included donating to the GoFundMe account, being screened as a potential kidney donor and using the classmates’ personal networks to circulate Gail’s search for a donor,” Clark said. “I included links to the GoFundMe account and the transplant services team at St. Barnabas Medical Center, as well as an article that appeared in the West Essex Tribune newspaper.”
To contribute to the GoFundMe page, visit www.gofundme.com/f/gift-of-life-for-gail. Prospective donors should contact Khorkin directly at gailkorkhin@yahoo.com or by phone at 201-704-6810.
—Leila Sassouni is a contributing writer for Anton Media Group