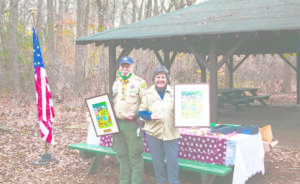 The Great Neck Boy Scout Troop 10 hosted a Court of Honor Ceremony at the Red Brook Road side of Kings Point Park just before the Park District halted group gatherings for the upcoming winter. This Court of Honor ceremony was particularly meaningful since the boys had the opportunity to honor their dedicated and respected Scoutmaster, Dr. Dwight (“Doc”) Rosenstein for his 25th anniversary as Scoutmaster of Troop 10. They also gave tribute to their committee chairperson, Effie Misoulis who was retiring after sharing many years of service with the troop.

For more than 25 years, generations of boys who were fortunate enough to be a part of Troop 10 learned life lessons and wilderness and survival skills from Doc. Many of the older Scouts including 21 Eagle Scouts credit Doc for his wisdom and guidance, which bolstered their emotional maturity and leadership skills. Some of the boys came from challenging circumstances, but their lives were turned around by being in Troop 10. Doc shared the story of his hiking stick which was a gift many years ago from a Troop 10 Eagle Scout whose difficult childhood was transformed by being a part of their Troop. For decades, boys under Doc’s leadership have overcome physical and mental challenges designed to foster leadership skills including planning, reviewing and evaluating and communication resulting in enhanced competence and confidence. Sharing these experiences, the scouts develop strong bonds of friendship. Numerous camping trips (around 6 overnights per year), outdoor adventures and community service projects provided the platform for teaching life skills. Doc equips the older Scouts with knowledge and teaching skills, who then impart their knowledge to the younger ones. With his gentle wisdom, Doc has helped the Scouts of Troop 10 to mature into model citizens.

During this Court of Honor, the Scouts also gave tribute to Misoulis, who retired after sharing a decade of service to the troop. With 30-plus registered Scouts organized into five Patrols, Misoulis’ administrative and organizational skills were invaluable to Troop 10.

Despite her busy schedule, she still took time every year to put together a colorful calendar of the Troop’s scheduled activities along with photos of the boys’ adventures. A mother of a son who became an Eagle Scout under Doc’s leadership in 2014, Effie generously continued giving thousands of hours to Troop 10. Upon Misoulis’ retirement, it is fitting that a number of parents have stepped up to fill the many roles that Effie performed so well.

Troop 10 expressed their admiration for and gratitude to Doc and Misoulis by presenting them with personalized plaques and gifts of appreciation during the heartwarming ceremony. They plan to hold a formal 25th anniversary celebration with many of Doc’s friends from Nassau County’s Theodore Roosevelt Scout Council in the near future.

A Court of Honor is the Boy Scout’s equivalent of a school awards ceremony. Three times a year, the Scouts are honored for their advancements in rank and other achievements they have earned. The ceremony began with a Presentation of the Colors by a Scout Color Guard. Next, leadership was passed from the outgoing Senior Patrol Leader (SPL) to the incoming one. A Senior Patrol Leader is voted in by the senior scouts to be the head youth leader for the year. Having previously held many leadership positions, he is among the most experienced Scouts in the troop. During this Court of Honor, after the outgoing SPL shared a few words of reflection, he turned the ceremony over to the new SPL who introduced the youth leaders who will run the troop with him. They included the Assistant Senior Patrol Leaders, Scribe, Quartermaster, Patrol Leaders, Troop Guides, Instructor and Webmaster. Five new Scouts were welcomed into the troop. As for Rank Advancements, three boys advanced to the basic Scout Rank, four to Tenderfoot, three to Second Class, one to First Class, one to Star Scout and two to Life Scouts. Many scouts received numerous merit badges and other awards.

This ceremony followed the Park District COVID-19 guidelines by restricting attendance to only the Scouts and Troop 10 leaders, some of whom served as photographers and videographers during the ceremony. Troop 10 is proud to acknowledge the support of the Great Neck Park District Commissioners for allowing us to hold our meetings at the park during the fall months and for providing guidance to conduct them safely.
Troop 10 now meets on Sundays at 9:30 a.m. virtually. If you are interested in joining, contact Rosenstein at djrosenstein@gmail.com.