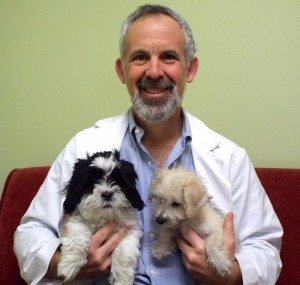 Veterinarian Keith Niesenbaum and the Great Neck Dog and Cat Hospital are on a mission, Project Puppy, to find good homes for 23 young puppies, rescued from a mid island pet shop that has gone out of business.

Dr. Niesenbaum and his staff are holding an adoption event this Sunday from 10 A. M to 2 P.M. at the facility at 333 Great Neck Road in hopes of quickly placing the dogs, whose ages range from 13 weeks to 25 weeks.

The staffs at Great Neck and Niesenbaum’s other location, Crawford Animal Hospital in New Hyde Park, have been busy over the last week examining and working with the puppies.

“I want the puppies to be as healthy as possible before we put them up for adoption,” he said.  “Once we determine what we have and what their vaccination status is we’re going to adopt these puppies out for a $300.00 fee.”

Dr. Niesenbaum estimated that normal expenses for a puppy in its first year would easily be $1000 or more.

“They were perfectly cared for,” said he emphasized. “They were all fed. They’re designer breeds (not AKC registered), you know, yorkie poos, Maltese, some pure breeds. Very few puppies in shops have AKC papers.”

“I want the puppies to be as healthy as possible before we put them up for adoption, “ he continued. “But I have their health records and their ownership papers.”

“The process of adoption is going to involve coming in, looking at the puppies and filling out an application, including references,” the vet explained. “We want the puppies to go to good homes.”

When asked about the possibility that the dogs were from puppy mills, Dr. Niesenbaum said, ”They all came from commercial breeders. To sell puppies in Nassau County they have to come from USDA certified breeders without serious USDA violations. As far as I know, the owner of the shop was compliant.”

The owner knew Niesenbaum and contacted him several weeks ago for help in placing the dogs when the decision to close the business was made.

“When we first had discussions there were 50,” the vet recalled.  “At one point they had 80 there.  But I said ‘Ok’ and I said we would take the 50 dogs.  He then decided to slash the prices on the puppies and sell them for what he could get. So the number dropped.”

The shop continued to sell off the dogs until there were just 23 needing placement. Niesenbaum had originally planned to give the two German Shepherds to the Wounded Warrior Project but those dogs were sold just before the remaining dogs were transferred to Niesenbaum’s care.

Negotiations dragged on for a few weeks as the owner continued to find success in selling the dogs and kept stalling the date when they would be turned over to the Great Neck Hospital. “I didn’t want it to get to the point where I felt that the owner might walk away from the puppies,” said Niesenbaum.

“I was concerned for their safety. I didn’t think he would do something horrible like abandon them but I was worried about getting those puppies into our hands. Our goal is to put these 23 puppies into good homes. I don’t think we’re going to have a problem.”

For further information, readers can go to Niesenbaum’s website http://www.greatneckdogandcathospital.com/adoptions.pml or call 516-482-2552.