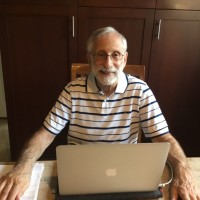 The Great Neck Library family is pleased to welcome George Trepp as Interim Director.  He was appointed to this position by the Board of Trustees at the Sept. 30 Board meeting, and began on Oct. 6.

Trepp brings to the Library a wealth of experience in the library world.

He holds a Masters in Political Science and a Masters in Library Science from Pratt Institute.  What began with a position as Information Assistant at the New York Public Library, led him to become a Library Trainee in the South Bronx where he then gained a position as Librarian.  Trepp’s first appointment as Library Director was at the New Brunswick Free Public Library in New Jersey.  To follow, he would have a rich history as Director of the Long Beach Public Library, from which he retired in 2015 after a tenure of 38 years.

While at Long Beach Library, Trepp navigated through many challenges and project accomplishments.  Over the course of 10 years, he oversaw the encapsulation and removal of asbestos in the Library.  He managed a major renovation and expansion of the Main Library in 1997.  In 2012 he guided the Library through to a recovery from Superstorm Sandy.  Trepp worked around the clock with staff to restore basic services for the community.

Trepp expressed several goals that he has for the Great Neck Library while Interim Director.  He will be overseeing the Main Library and capital projects at the Station and Parkville Branches.  He said he also will be overseeing a plan for the reopening of the Library during the pandemic.  He will work with the Board of Trustees to assist with the Director Search, and advise on the building of a partnership between the Board and director.

The staff, administration, Library Board, and community look forward to the Library moving onward under the guidance of George Trepp.