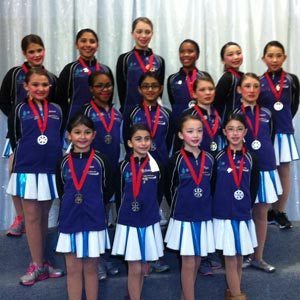 This was the Icettes team’s first competition of the season, and they performed a perfect routine.

“They exceeded our expectations” said Coach Audra Smith, “we couldn’t have asked for a better skate so early in the season.”

As part of the Eastern Synchronized Skating Challenge Series, the Terry Conners Synchronized Skating Open attracts about 850 skaters and coaches, and over 1,500 fans and supporters over the two day event. Hundreds of teams from the tri-state area demonstrated choreographed programs that were judged for speed, difficulty of maneuvers and precision, as well as for style and artistic expression.

The team is now gearing up for the 2014 Lake Placid ISI Figure Skating Championships on Jan. 11 and 12.