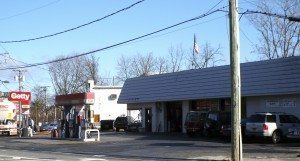 The troubles began three years ago and continue for Great Neck Plaza Getty gas station owner Fernando Cerff as he struggles to keep his business going after 35 years at the intersection where Cutter Mill Road meets Bayview Avenue.

The Getty Oil Corporation, in filing for bankruptcy in 2011, caused his leasing arrangement to be switched to a company in Connecticut, Alliance Energy, and he now finds his monthly payments to be escalating out of control.

Also complicating things for Cerff, who came to the United States from Peru in 1970 and lives with wife Mariza in the Plaza, is his claim that Getty owes him over $60,000 in down payment, interest and commission fees and that no one seems to know where that money is.

A new problem surfaced last week on a far more personal level for Cerff who has two daughters (Maria and Georgina) and a son, Fernando, Jr., The Cerffs also have three grand­children (Carlo, Juliana and Gabriela).

Cerff’s replica of the Statue of Liberty, which he proudly displayed on the top of his station until it was stolen in the 1990’s, returned, remounted, torn apart by vandals, rebuilt and loaned to the North Shore Hebrew Academy in Kings Point, is gone again.

No one seems to know where it is or whether it even still exists.

Much of Cerf’s anger over the situation his business is in is directed at Alliance Energy, who were not available to speak

Rents are the issue, Cerf said.

Cerff admits that many of his fellow station owners are also hurting financially. He’s part of a class action suit to recover his money from Getty.

I cannot move. Where would I go? All my customers are here. I love Great Neck. It’s a beautiful town.”

When a photographer went to the North Shore Academy last week to take a picture of Cerff’s statue, which he had loaned to the school at the request of a former school employee after 9/11 so that the children could appreciate it, no one at the Academy could say for sure what had become of it.

Asked why he first decided to display the statue on his roof, Cerff answered. “I had a kind of guilty conscience. I came to this country and I had a lot of good things happen to me and I never went into the army. I tried to join, but I was an illegal alien at the time. So I wanted to do something nice, you know?”

“I bought the statue in rough form and I painted it and added lights,” he said of the almost seven foot Fiberglas structure. Cerff  added that the statue was eventually stolen and the story was eventually written up in a newspaper and everybody was looking for it.

Eventually the statue was just dumped near-by and when Cerff got it back it had been broken into four pieces. Cerff repaired it, added a wood and Styrofoam base to the make the statue almost 10 feet high, and put it back on the roof. Police were never involved, just a neighborhood searh by friends and neighbors.

“Everyday when I came to work the first thing I did was check to see if it was still there, ” he recalled. “One day (after about two years) I lifted my head to look and the statue was not there. I went up to the roof and it was in 40 pieces. Everything was broken.”