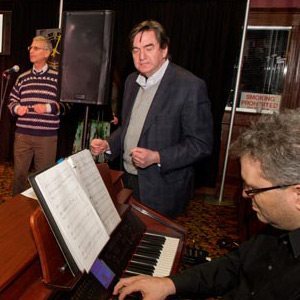 The chief of obstetrics and maternal fetal medicine for the North Shore University Hospital has written a play that was performed March 5 at the Patchogue Theatre as part of the theater’s New Musicals Project, the North Shore-LIJ Health System announced today.

The notion of writing the play – called The Rule of Disorder – came to Burton Rochelson, MD, in 1990, when he realized that he had the time to practice medicine and continue his pursuit of being a lyricist and playwright. His cousin, Jonathan Glickman, now an aerospace engineer at the Goddard Space Flight Center, wrote the musical score.

Dr. Rochelson was a kid with a voice. Not a good voice, mind you, but one that could belt out songs on center stage in high school plays and regional theater. It wasn’t long before the Brooklyn boy took to directing and writing lyrics for school plays and was one of a large band of high school students who were part of an annual student-run musical production – SING! – that also gave voice to the likes of Carole King, Barbra Streisand and Paul Simon.

When entering the apartment, he saw the packed bookcase filled with an ancient array of leather-bound books he had seen as a child. He picked out a biography of Albert Einstein, which included a small paragraph on the tragic life of another theoretical physicist, Paul Ehrenfest.

He found and read a 300-page book on Paul Ehrenfest, who was a close friend of Einstein’s. The book was filled with moving correspondence between the two men. Feeling threatened by the anti-Jewish events that were leading up to World War II, Ehrenfest killed himself and his handicapped son.

Dr. Rochelson knew this was the making of an amazing play. The story resonated with the doctor, whose doctor father was a Holocaust survivor who lost his family and came to the United States when he was 40.  He started a family and the devoted father of two passed on a passion for the Russian playwrights.

It had been more than a decade since Dr. Rochelson found time and inspiration to write. He spent a high school summer studying theatre at Georgetown University. While attending Columbia University, he continued to act in local theater productions. He wrote his first play – The Wizard of Gauze – in 1978 while he was in medical school at the University of Michigan.

The Rule of Disorder is the story of the close friendship between two men who share a love of physics but differ markedly in how they show love, admiration and commitment to their family.

“I am so excited by this production,” said Howard Beckerman, the producer and artistic director of the New Musicals Project at the Patchogue Theatre.