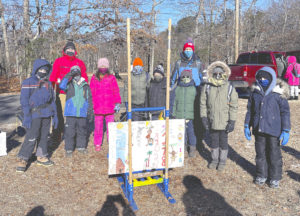 The sound of footsteps crunching through the leaves could be heard throughout the grounds of Schiff Scout Reservation on a late Saturday in January. Adhering to all safety precautions and guidelines, the Arrow of Light cub scouts (fifth graders), who are part of Great Neck Cub Scout Pack 178, recently completed the Klondike Derby. The host of this event is the Shelter Rock District of the Theodore Roosevelt Council of BSA. This much anticipated day of scouting and skills demonstration was completed at Schiff, a dedicated Scout camping site in Wading River. On this chilly yet sunny day, eight cub scouts pulled their handmade wooden sled, which had been mounted atop skis, throughout the park’s grounds. The scouts were asked by the “mayors” of various “cities” to demonstrate a multitude of cub scout skills—with no adult help allowed. Eventually, once these skills were successfully completed, the scouts finished their day at the “North Pole.”

The Cub Scouts completed many important life skills such as building a fire using only two matches, correctly answering many First Aid questions, demonstrating how to stop severe bleeding from an arm wound and building a makeshift stretcher, which they then would use to carry a fellow Scout down a path. Teamwork and communication were other areas of focus that day. These were demonstrated with a game of direction whereby a blindfolded Cub Scout was given instructions to pick up a bean bag while avoiding dangerous obstacles (tennis balls and hula hoops) by another Scout. Scoring for events was heavily based on outstanding teamwork, leadership and sportsmanship. There were four other Cub Scout packs from Nassau in attendance.

Prior to the Klondike Derby, throughout the cold months of December and January, the Cub Scouts held many safe outdoor meetings at various parks, such as Muttontown Preserve.

Here the Scouts practiced skills training under the guidance of their den leaders, Seth Kurpiel and John Pschenica. Some topics that were covered included first aid, trail signs and blazes, fire building, knot tying and lashings, map and compass orienteering, pace and distance measurements, Bear Bag preparation for camping, and folding the U.S. Flag. The Scouts also proudly put fresh coats of blue and gold paint the cub scout colors on the sled that was used; a sled which was actually built a few years prior by former Pack 178 Cub Scouts for the Klondike Derby and passed down for future generations of scouts to use.
Cub Scouts that participated hail from all four Great Neck public elementary schools: Elizabeth Guan, Sahil Gupta, Riley Kurpiel, Ethan Pschenica, John Rowles, Max Stolove, Caden Young and Charlie Yu.

Pack 178 is always happy to welcome new Scouts. Any girls and boys from Kindergarten through fourth grade should visit www.greatneckcubscouts.com for more information.