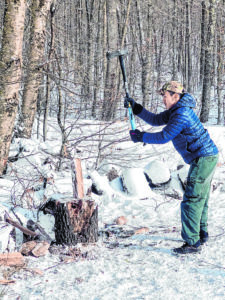 Troop 10, BSA, of Great Neck completed an extremely challenging overnight camping trip in the Catskill mountains. Eight scouts and six adult leaders attended our Council’s Bluenose 2022 winter camping event. This is a two-night tent camping trip at our council camp in Livingston Manor, on President’s Day weekend in February.
Temperatures for a short period rose to 32-33-degrees, but for the most part they were in the low 20s and teens. We arrived on Saturday and set up camp during a snow squall with blizzard conditions for short periods of time. We went to bed Saturday night with temperatures in the teens and awoke Sunday morning to 4 degrees.
With physical activity, good food, adequate hydration and appropriate clothing, everybody stayed warm, and the scouts had fun for two days and nights. All consumed large amounts of food in cans or bags, heated or cooked in boiling water. This included soups, chili, chicken fajitas and three-egg omelets packed with nutrients.
During the day there was much sledding to do. Despite the snow, we were able to gather wood to have a large campfire in our site the second day. Interestingly, we could not get the kind of rip-roaring fire that we usually get in some other months due to the sub-freezing temperatures.
The air was crisp and clear, however. In the evenings, a few other troops from the council joined for an indoor fireplace campfire and others entertained with skits. Cracker-barrel was provided by the staff. After a fast breakdown of camp Monday morning, everybody enjoyed breakfast down at the Liberty Diner.
Troop 10 meets at the Manhasset-Lakeville Fire Department on 25 Prospect St. on Mondays from 7:30 to 9 p.m. on school days. If you are interested in joining Troop 10, please contact Dr. Dwight J Rosenstein at djrosenstein@gmail.com.
—Written by Dr. Dwight Rosenstein, Scoutmaster Troop 10