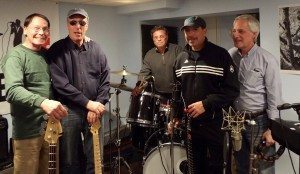 Dunster Road Band, four slightly older generation musicians from Great Neck and a fifth from Huntington, are continuing their life long passion for rock and roll, getting together once or twice a week to rehearse and even making an occasional public appearance.

Dunster Road’s song list is filled with Beatles and Rolling Stones tunes. But the group also favors other groups from the ‘60s such as The Kinks, The Zombies and The Band.

“This is the kind of thing that keeps you young,” said Adickman, who describes himself as a “dentist by profession, musician by nature” and has a special interest in Jewish humor, having posted a number of videos about it on the Internet.

Sonenberg, who owns a Great Neck marketing firm, and Adickman, who has a dental practice on Northern Boulevard, have both lived in Russell Gardens for over 30 years and named the band after one of its streets.  Sonenberg is a former trustee of the village and Adickman currently sits on the board.

“It’s fun,” added Wechsler, who lives in Huntington. “We’re musicians. If you’re musicians you have to play. It’s really all about self-fulfillment. If we’re not playing, we’re wishing we were.”

“You know, when a song is really clicking and everything is just right, it’s ‘in the pocket’ and that’s a great feeling,” added Sonenberg when he was asked about what satisfaction his participation gave him.

“It’s not only loving music and loving the playing of it,” said Morris. “It’s also loving performing and sharing our music with other people so they can enjoy it. It’s a natural high.”

Morris lives in Great Neck, is currently a professor at Hofstra but graduated from the Great Neck School system, taught at South Middle and was an assistant principal at Baker Hill.

The connection between Sonenberg and Morris goes back the furthest, playing together in the 60’s in their high school band, The Savages,  who were the big attraction at The Oriental Zest Discoteque in what was then known as the Great Neck Plaza Shopping Center.

Brill, who is an investment advisor and also one of the top ranked senior tennis players on the east coast, recently moved from Great Neck after living here for over 20 years.

Sonenberg has written and published a number of songs over the years. The Savages recorded one of his compositions, “The Best Thing You Ever Had” (on the Red Fox Label) in the 60’s with Sonenberg as producer and lead vocalist.

Also in that band was another Great Neck native, bassist Neil Portnow, who continued to keep in touch with Sonenberg and Morris.

Portnow made music his profession and went on to become one of the most respected and honored people in the industry. He has been president and CEO of the National Academy of Recording Arts and Sciences since 2002 and recently was renewed until 2019.

Sonenberg and Morris have just returned from the West Coast after visiting with Portnow as his guests at the 57th Annual Grammy Awards.  Morris and Sonenberg reconnected musically only recently after more than 30 years.

“Ken said to me three years ago, ‘we don’t have a drummer anymore. Are you interested?’ Morris recalled. “I said I was and here I am.”

Dunster Road Band’s ambitions are quite modest, deriving plenty of pleasure from their weekly rehearsals and jams. “We figure like one or two gigs a year are fine,” Sonenberg says.

Wechsler, who imports and distributes food machinery to the baking industry, adds, ” We’ve been waiting all of our lives to become overnight sensations. It’ll come.”