Dr. Anthony Moschetto, whose practice is on Northern Boulevard in Great Neck, was arraigned on Nov. 9 on 77 counts in a murder-for-hire plot against a rival doctor. Moschetto, 55, of Sands Point, was charged with conspiracy, arson, weapons possession, criminal sale of prescriptions and other charges, according to Acting Nassau County District Attorney Madeline Singas regarding the indictment of the cardiologist who allegedly contracted hitmen to kill a competing doctor.

The defendant was arrested on April 14 after a joint investigation by the NCDA, the Nassau County Police Department and the U.S. Drug Enforcement Administration.

The grand jury indictment charges include:

• First-degree criminal possession of a weapon

• Four counts of third-degree criminal possession of a controlled substance

• Four counts of third-degree criminal sale of a controlled substance

• Four counts of third-degree criminal possession of a weapon

• Two counts of third-degree criminal sale of a firearm

• Fourteen counts of fourth-degree criminal possession of a weapon

Bail was continued at $2 million bond or $1.25 million cash. The defendant, who pleaded not guilty, is due back in court Dec. 9. If convicted on the top charge, Moschetto faces up to 25 years in prison.

“The defendant was a respected member of the community, caring for patients in Nassau County, but allegedly he had a sinister side and ordered the death of a rival cardiologist,” Acting DA Singas said. “Working with our partners in the NCPD and DEA, we were able to break up this complex murder-for-hire plot before someone was killed.”

Acting Police Commissioner Thomas Krumpter said, “Today’s announcement is the culmination of an extensive investigation that was worked on collaboratively with the Nassau County Police Department, the Nassau County DA’s Office and the DEA. Protecting the public is our number one priority and bringing this dangerous defendant to justice was of the utmost importance.”

DEA Special Agent in Charge James J. Hunt stated, “Investigations focused on prescription drug traffickers have dramatically increased over the past ten years. As the investigations increased, we have seen an escalation of crimes associated with the diversion of prescription drugs. No longer do we see simple drug diversion, but we see criminal organizations selling diverted pills on the street; an increase in Medicaid fraud; and similar to this case, a rise of violent crimes.”

Acting DA Singas said that the alleged murder-for-hire scheme was discovered when an undercover police investigation involving the purchase of Oxycodone pills led to the additional undercover purchases of two fully loaded assault weapons, as well as the seller’s pursuit of dynamite for the purpose of blowing up a property.

During the course of the investigation, it was discovered that the assault weapons and prescriptions for the pills were originally acquired and transferred to the seller by Moschetto, who sought to pay for the arson of a fellow cardiologist’s office, as well as the murder of the fellow cardiologist, partially through the illegal transfer of prescriptions and the weapons.

The investigation started in December 2014, when the first of six undercover drug buys from the seller was conducted. During this time, the drugs sold to undercover detectives included 410 Oxycodone pills.

During one of the undercover drug buys, a conversation ensued about a Feb. 25 arson that detectives were subsequently able to link to Moschetto. The arson damaged but did not destroy the office of the fellow cardiologist, whose relationship with Moschetto had soured due to a professional dispute.

As the investigation progressed, Moschetto gave blank prescriptions and cash as payments, at one point for the assault and at another point for the murder of the fellow cardiologist. Moschetto also asked for the assault of his victim’s wife if she was present during the primary assault. At the time of Moschetto’s arrest, his instruction reverted back to the commission of an assault against his victim.

The execution of search warrants on April 14 led to the discovery of a cache of weapons in the doctor’s home, including an AR-15 and an M1 Carbine. Many of the guns and other weapons such as knives were found in a hidden basement room only revealed via a switch-activated moving bookshelf in the doctor’s Sands Point home.

The investigation is being conducted by the NCDA’s Organized Crime and Rackets Bureau; the NCPD’s Narcotics & Vice Squad and Arson Squad; and the DEA’s Long Island Division Office Tactical Diversion Squad, which consists of agents and officers of the DEA, Nassau County Police Department, Rockville Centre Police Department and Port Washington Police Department.

The case of codefendant James Chmela, 44, is in Waive to Grand Jury status and no future court date is available. 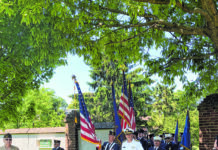