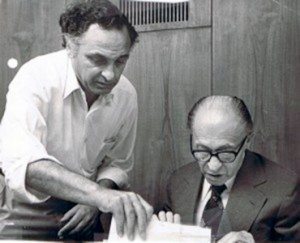 This film, directed by Richard Trank, is based on the best-selling book by Ambassador Yehuda Avner, The Prime Ministers: Soldiers and Peacemakers. The film takes the audience inside the offices of Israel’s prime ministers through the eyes of an insider, Yehuda Avner, who served as a chief aide, English language note-taker and speechwriter to Levi Eshkol, Golda Meir, Yitzhak Rabin, Menachem Begin, and Shimon Peres. This second part in a two-film series examines Ambassador Avner’s experiences with Prime Ministers Yitzhak Rabin, Menachem Begin and Shimon Peres as well as his service as Israel’s Ambassador to England. The early efforts at negotiating agreements with Egypt, the raid on Entebbe, Anwar Sadat’s historic visit to Jerusalem, the Camp David Accords, the bombing of Iraq’s nuclear facility, the war in Lebanon, the Oslo Accords and the ongoing struggle to make peace with Israel’s Arab neighbors and the Palestinians are some of the topics covered as The Prime Ministers: Soldiers and Peacemakers builds to its dramatic and emotional conclusion.

Weaving a rich tapestry of history and personal testimonies, The Prime Ministers brings some of the most important events of the 20th and 21st centuries to life. Featuring the voices of Sandra Bullock as Golda Meir, Michael Douglas as Yitzhak Rabin, Leonard Nimoy as Levi Eshkol and Christoph Waltz as Menachem Begin, The Prime Ministers is written, produced and directed by Academy Award winner Richard Trank and co-written and produced by two-time Academy Award winner Rabbi Marvin Hier.

Visit the Gold Coast Arts Center at 113 Middle Neck Rd. in the busy business district of Great Neck Plaza. The GCAC entrance is in the rear of the building, via the municipal parking lot.

About the Gold Coast Arts Center

The Gold Coast Arts Center (formerly the Great Neck Arts Center) is an independent 501(c)(3) not-for-profit organization serving the community for over 20 years and dedicated to promoting and supporting the arts through education, exhibition, performance and outreach. Since its founding in 1995, over 100,000 people of all ages and backgrounds have taken advantage of our many classes, live performances, programs, workshops, films and art exhibits. Every day the Gold Coast Arts Center provides students, teachers, parents, senior citizens and community members with opportunities to learn about, discuss, view, enjoy, share and make art!

GCAC is proud to be an affiliate of the John F. Kennedy Center for the Performing Arts: Partners in Education program and the National Gallery of Art in Washington D.C. They are also active partners with several universities and school districts throughout Long Island and Queens.