The Furman Film Series at the Gold Coast Arts Center (formerly the Great Neck Arts Center) previews the best new independent films and studio releases, followed by Q&As with filmmakers and industry professionals. And winter is the time to catch all of these great films right here in your own hometown.

Right now, in the midst of the film festival (two movies have already been screened, some with series tickets purchased), there are still more wonderful screenings coming up. On Jan. 8, come and enjoy Ballet 42. The film The Mafia Only Kills in Summer is set for Jan. 22 and Gett: The Trial of Viviane Amsalem will be screened Feb. 5. 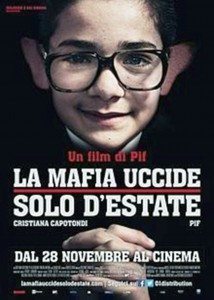 Ballet 42 is directed by documentarian  Jody Lee Lipes for USA, 2014. It runs 72 minutes. Lipes crafts an intimate, fly-on-the-wall documentary offering a rare peek into the highly-guarded world of professional ballet. The film shadows Justin Peck, the 25-year old choreographer of the New York City Ballet, as he undertakes the Herculean task of creating the company’s 422nd original piece while simultaneously fulfilling his role as a Corps de Ballet member. Lipes chronicles Peck’s creative process from its embryonic stages to its highly anticipated premiere, quietly observing as he balances a roster of musicians, designers, and dancers from this famed institution.

The Mafia Only Kills in Summer is directed by Pif. Italy, 2013. It runs for 90 minutes, in Italian with English subtitles. Pierfrancesco Diliberto (a renowned TV host and political comedian, better known as Pif) wrote, directed and stars in this subversive, irreverent feature debut about Arturo, a young boy whose obsession with the Mafia’s casual presence in his city surpasses even his passion for Flora. Flora is the beautiful schoolmate who remains his main love interest until adulthood. Pif uses Arturo’s unrequited love story as the vehicle to narrate the most tragic events in Italy’s recent history, starting with the Cosa Nostra’s criminal actions in Sicily in the ’70s, which soon spread through the country (encompassing the barbaric murder of judges Falcone and Borsellino, an event that Pif handles with astounding boldness). Winner of the Audience Award at the Torino Film Festival, Mafia is a brave and intelligent dark comedy with a powerful message.

Gett: The Trial of Viviane Amsalem is directed by Ronit Elkabetz and Shlomi Elkabetz, Israel, 2014. It runs for 115 minutes. This film features an Israeli woman seeking to finalize a divorce (a gett) from her estranged husband finds herself effectively put on trial by her country’s religious marriage laws, in this powerhouse courtroom drama. Winner of the Israeli Film Academy Ophir Award for Best Picture.

About the Gold Coast Arts Center

The Gold Coast Arts Center (formerly the Great Neck Arts Center) is an independent not-for-profit organization serving the community for over 20 years and dedicated to promoting and supporting the arts through education, exhibition, performance and outreach. Since its founding in 1995, over 100,000 people of all ages and backgrounds have taken advantage of our many classes, live performances, programs, workshops, films and art exhibits. Every day they provide students, teachers, parents, senior citizens and community members with opportunities to learn about, discuss, view, enjoy, share and make art!

GCAC is proud to be an affiliate of the John F. Kennedy Center for the Performing Arts: Partners in Education program and the National Gallery of Art in Washington D.C. We are also active partners with several universities and school districts throughout Long Island and Queens.

The Gold Coast Arts Center is at 113 Middle Neck Rd. (entrance in the rear, through the municipall parking lot). For further information, call 516-829-2570.