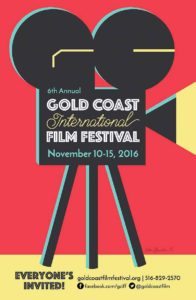 The Gold Coast International Film Festival (GCIFF) will be returning this fall for its sixth year to celebrate the films and filmmakers who capture our imaginations on the big screen. From Nov. 10 to 15, all are invited to enjoy the best major and independent releases, filmmaker conversations, parties and awards.

This year’s festival events, many of them free, will include screenings of more than 50 feature-length and short films from multiple countries, dozens of Q&As with prominent filmmakers and celebrities, parties, family-friendly events and a glamorous Opening Night Gala benefiting the nonprofit Gold Coast Arts Center, a vibrant multi-arts institution founded in 1993, which produces year-round cultural classes, exhibits, concerts and programs that bring music, art, theater, film, dance and educational experiences to the community.

The Gold Coast International Film Festival is accepting submissions of short and feature films for 2016 through Film Freeway. The late submission deadline is Monday, Aug. 15, and the final deadline is Thursday, Sept. 1. Official submission requirements and guidelines can be found at www.goldcoastfilmfestival.org. Filmmakers in grades K-12 can submit films to the Young Filmmakers Program. For more information, go to www.goldcoastfilmfestival.org/festival/young-filmmakers.

GCIFF will be screening Ira Sachs’ Little Men, about a 13 year old whose family moves into his father’s childhood home after his grandfather dies, on Aug. 1 at 7:30 p.m. at the Bow Tie Squire Cinemas, 115 Middle Neck Rd. The event will feature a special appearance by producer Lucas Joaquin. For a full lineup of summer films, visit www.goldcoastfilmfestival.org.