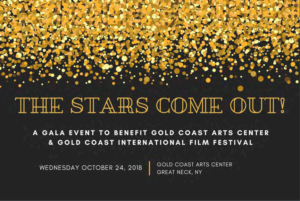 The red carpet will roll out on Middle Neck Road as a star-studded evening featuring an intimate conversation with iconic film and TV star Robert Wagner benefits the Gold Coast Arts Center and Gold Coast International Film Festival on Wednesday, Oct. 24, from 6:30 to 10:30 p.m. at the arts center at 113 Middle Neck Rd.

During the evening, Wagner will receive the second annual Burton Moss Hollywood Golden Era Award in recognition of his long, illustrious career that began in 1950 with his film debut in The Happy Years starring Dean Stockwell. His film credits include With a Song in My Heart, Broken Lance with the legendary Spencer Tracy, Dragon: The Bruce Lee Story, The Pink Panther, The Curse of the Pink Panther, Midway, The Towering Inferno, Banning, Harper, Prince Valiant, The True Story of Jesse James and All the Fine Young Cannibals. He recreated his role of Number Two, the villainous henchman to Dr. Evil, the archenemy of Mike Myers’s title character in Austin Powers: The Spy Who Shagged Me.

Wagner also starred in three long-running hit TV series, including It Takes a Thief with Fred Astaire, Switch with Eddie Albert and Sharon Gless, and Hart to Hart with Stefanie Powers, as well as the top-rated miniseries Windmills of the Gods based on Sidney Sheldon’s best-selling novel, A Kiss Before Dying with Joanne Woodward and There Must Be a Pony with Elizabeth Taylor. 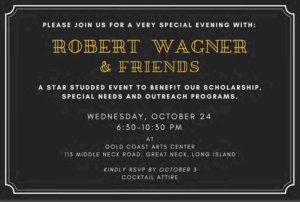 The physical award is an original work of art created by sculptor Edwina Sandys, the granddaughter of Sir Winston Churchill. The first Burton Moss award was presented posthumously to Rita Hayworth and accepted by her daughter, Princess Yasmin Aga Khan, at a presentation made at a private reception in the New York City home of Sandys last October.

The evening will begin at 6:30 p.m. with cocktails, food, music and a silent auction. Following the conversation with Wagner in the theater, the evening will conclude at 10:30 p.m. after a dessert reception. Cocktail attire is suggested. The cost is $250, with proceeds benefiting the arts center’s education, enrichment and outreach programs, such as Making Memories that serves those with Alzheimer’s and memory impairment and ArtReach, which brings faculty and programs to enrich schoolchildren’s curriculum with arts education in ceramics, painting, music, dance and chess. Purchase a ticket at 516-829-2570.

Look for details in upcoming issues about the 2018 Gold Coast International Film Festival, which begins on Nov. 2.