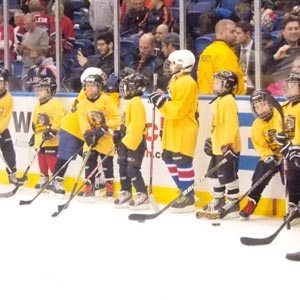 Although they were extremely eager to see the Islanders play Montreal, they were over-the-top thrilled to, once again, get on the ice in between periods for a shoot-out in front of thousands of Islanders fans. The 20 Bears team members who attended, received locker room passes where they were able to meet and “hi-five” the Islander team as they were getting on the ice.

Coach and director of hockey, Dan Marsella and coaches Frank Cilluffo, Eric Judson and Napoleon Georgatos all guided the skaters before, during and after the shoot-out. Fans were animated and cheering on the Bears throughout the stadium.

The energized skaters made two to three shots and both players and goalies did a great job! There is another trip to the Nassau Coliseum scheduled for Jan. 25, when the Bears will again participate in another shoot-out.