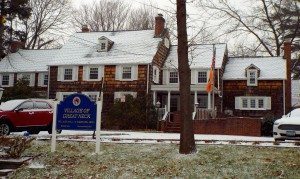 It looks like the Village of Great Neck has found a very interested buyer
for its soon-to-be-replaced historic village hall, the Great Neck School District.

“They’re not just interested,” said Mayor Ralph Kreitzman at last week’s regularly scheduled board of trustees meeting. “They’ve looked at the building. They’ve had their architect look at the building. This is not just ‘we think it’s a good idea.’ They want it.”

Schools’ Superintendent Tom Dolan, while not addressing any specifics regarding a potential purchase or how the district would utilize the building, said, “If the school district were to acquire a property it would have to be voted on by the school community.” That would indicate the possibility of it being placed on the ballot in May.

As to the possible purchase price, no figures were discussed in public.

Prefacing his requests, the mayor said, “If we authorize this, they would then, at their meeting on the 16th [of March], take whatever action is necessary such that this would be put on the ballot for the next normal election…What I’m suggesting is that we authorize the sale to them…They’re going to get an appraisal, we’re going to get an appraisal.”

“They have a number of prospective uses for this building,” Kreitzman added. “They’ve indicated that they would preserve this building.”

The prospect of anticipated preservation, the school district’s history of preserving historic buildings and maintaining them, especially on the South campus, struck a positive chord among the trustees.

Kreitzman mentioned that a purchase by the school district would mean that any future use would not conflict with the Baker Hill Elementary School that surrounds the village property.

“If there were something else here it would interfere with the school,” he said, “so I think in some ways the community benefits, as does our public schools as well.”

“There could be many potential buyers,” the mayor answered. “There’s a lot of sentiment for preserving this building.”

“The village has the right not just to take the best price, but to also sell it to the buyer who’s going to develop it in the way that’s in the best interests of the community,” he said.

“What you’re doing by selling it to the school district is really helping your own residents. It serves a twofold purpose. As long as you’re getting within the range of fair market value, then you’re not being hurt by the sale.”

Limmer also said that a final ratification by the board of trustees would be needed when the actual price and buyer were determined.

When previously asked about why a new village hall was needed, the mayor said: “It’s an old, old building. It isn’t laid out efficiently. It does not have an elevator, so there are ADA (Americans with Disabilities Act) issues. There’s no adequate parking. It is in need of significant work.”

The building has a history that goes back over 200 years. Part of it was a farmhouse owned by the Baker family. The Bakers actually moved it across the street to its present location. The village acquired the building in 1955 and renovated it. A fire in the ‘70s caused significant damage. The garage structure behind the hall once had apartments on the second floor.