Israel Lacrosse is a nonprofit organization dedicated to establishing the sport of lacrosse in Israel as a gateway to providing meaningful charitable work in Israel’s underserved regions. The team includes both Israeli players as well as members of the Jewish diaspora; Edelson is the only Long Islander to make the team.

“Israel Lacrosse is a truly special program that unites Jews from around the world and helps improve the quality of life for families in need throughout Israel,” said Michael Horowitz, coach of Team Israel U-19 National Lacrosse Team. “Hayden is an exceptional player and an inspiring teammate. We are happy to have him join our team. Israel Lacrosse will be playing exhibition games throughout the year and we encourage everyone to get involved, whether or not they are playing, to help spread the game we all love and the important work of Israel Lacrosse with underprivileged children in Israel.” 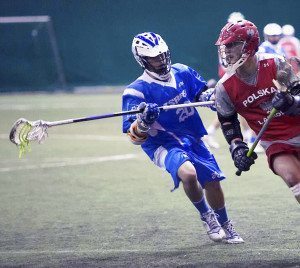 The Israel U-19 National Lacrosse Team roster was finalized following a tryout in Ashkelon, Israel. Variations of the team will have the opportunity to showcase their skills against some of the world’s best lacrosse players in a full slate of exhibition games leading up to the World Championships, including an international lacrosse showcase in Philadelphia in May 2016, featuring U-19 national teams from around the world. The U-19 team will also be holding exhibition games in the New York area during the weekend of April 8 to 11.

Edelson graduated from South High in 2015, where he was a standout member of the school’s lacrosse team, and has been part of Team Israel since 2014. Since joining the program, Edelson has traveled the world to compete in international lacrosse tournaments and to help introduce lacrosse to other countries by leading instructional clinics and mentoring children. Along with several other players from the United States, Edelson made Aliyah (the immigration of Jews to Israel) to attain dual citizenship and be more involved in Team Israel’s dedicated community service initiatives throughout Israel.

“Being a part of Team Israel is an incredibly rewarding and eye-opening experience, as I’ve had the opportunity to compete at a high level and teach the game I love to children all over the world,” said Edelson. “I continue to play because I love the sport. Lacrosse has done so much for me: it has taught me leadership and teamwork; it has given me self-confidence; it has honed my analytical skills. I consider it my responsibility to pay it forward, so I continue to play and try to give back in any way I can to a country and a people I love as my own.”

Israel Lacrosse was founded in 2011 with the mission of popularizing the sport in Israel and using lacrosse as a vehicle to teach leadership skills and teamwork as well as to build self-confidence in young children in Israel’s underserved areas. Israel Lacrosse also uses the sport to help develop better relations and understanding amongst young Israeli and Arab children.

Israel Lacrosse teams include a men’s and women’s national team, boys’ and girls’ U-19 teams, as well as boys’ and girls’ U-15 teams, all of which compete at the highest international level. Israel Lacrosse has helped facilitate major youth lacrosse programs in Ashkelon, Ashdod, Netanya, Tel Aviv and Ramla, as well as pilot programs in Kiriyat Gat and Haifa for more than 650 youth lacrosse players. The program also offers initiatives, including service trips, internship opportunities and volunteer projects to further connect with athletes in the United States, who have been instrumental to the growth of Israel Lacrosse, whose activities are funded primarily through philanthropic donations from the Jewish diaspora.

In the coming months, Israel Lacrosse will be playing a series of exhibition games across Long Island. For more information about events, how to become involved in Team Israel Lacrosse or to make a donation, contact Scott Neiss at +972 53 825 5952 or at scott@lacrosse.co.il, or visit www.lacrosse.co.il.