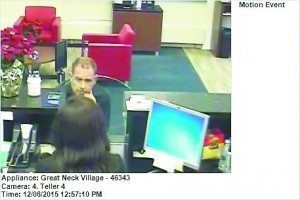 Jay Teich, 47, of Oceanside was arrested this morning for the Dec. 6 robbery at the Capital One Bank located at 121 Middle Neck Rd.

At around 1 p.m. on that December Sunday, Teich produced a note demanding money from a 22-year-old female teller, who complied by giving an undetermined amount of U.S. currency to Teich.

The burglar then entered the passenger side of a blue or black BMW and fled south on Middle Neck Road.

After more than five months, Teich surrendered to detectives this morning, Monday, May 16, at 10:00 a.m. He is charged with third-degree robbery and will be arraigned today at First District Court in Hempstead.