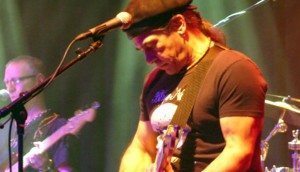 A renowned side guitarist to the legends and an accomplished singer and songwriter, Mark Newman
has played with the greats and now this Great Neck talent is on his way to the top, too. With a familiar classic sound bellowing with originality, yet reminiscent of so many soul, blues and rock greats of this time, Newman brings tones of familiarity, yet originality in his new EP “Brussels,” which just came out out this past March on Danal Music. Having played with greats like John Oates (Hall and Oates), Jim McCarty (The Yardbirds), Sam Moore, Willy DeVille and Sam the Sham, many of their influences can be heard on this new album, recorded in the Belgian capital bearing the same name, which can be purchased via iTunes and CD Baby. To hear for yourself, you can catch Mark Newman live on Friday, Aug. 7, for the Long Beach International Film Festival (www.longbeachfilm.com) or at several other spots throughout New York state this summer.

A New York native, Newman’s musical prowess has taken him around the world several times over, playing with an eclectic mix of noted musical talents from Sting to Elvis Costello and Travis Tritt, as well as his own solo work. A multistrings man, Newman has mastered electric, acoustic and lap steel guitar, as well as the mandolin and dobro, and with a voice reminiscent of many rock and bluesmen before him, it has the familiarity of an old friend, yet the power and soul of many of today’s rock, soul, folk and R&B icons. For over five years, Newman and fellow songwriter Naomi Margolin have run the Music From the Hive singer-songwriter series and for the past two years, they have also run the Original Music Series for bands, in an attempt to keep original music alive on Long Island. Newman also records and produces local artists in the Long Island and New York City area.

He has said of some of his mentors, “You’d have to be an idiot not to learn from the guys I’ve had the honor of playing with.”

He added, “Hey, Sam The Sham didn’t just write ‘Wooly Bully.’ He wrote some of the best blues songs
I ever heard. And, Sam Moore’s almost 80, yet sings like he’s 25.
He taught me not to overthink, just open your mouth, and let it go. I don’t know if I’ve even come close to doing this, but what I do know is what I’ve learned from those three
is invaluable.”

And for Newman, accessibility is also important. “When I have to go on tour, I’m close to two major airports…It’s a relief to drive 20 minutes before a six or more hour flight instead of two hours,” he said.

To hear for yourself, purchase Mark Newman’s music via iTunes: itunes.apple.com/us/album/brussells-ep
/id978060700.