Walking through Times Square, a young boy steps into a theater, ticket in hand, and finds a seat in the back of the theater. The lights go dim as the actors fill the stage, the little boy’s heart racing as the plot unfolds. With its themes of racism and societal struggles, The Great White Hope opens his eyes to drama’s impact on the audience, showing him that theater brings everyone together in the midst of societal issues. 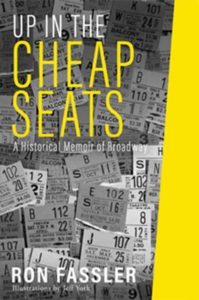 Forty-eight years later, that same fan continues to spread this message with others through writing.

Ron Fassler, who grew up in Great Neck, recently published Up in the Cheap Seats that details his experiences as a Broadway enthusiast throughout his teenage years.

“I had this extraordinary education in the theater, impossible to do today, all self-funded by my Newsday paper route,” Fassler said. “Many people have encouraged me to turn [my stories] into a screenplay or a one-man show, but the best venue for them to me felt like a book.” 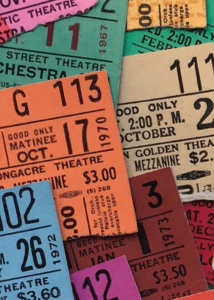 Fassler first got into theater after seeing his first Broadway musical when tickets were only $3. Every weekend for four years, Fassler would take the train to Times Square to watch the newest production, attending more than 200 musicals and plays. A student at Great Neck South Junior and Senior High Schools, Fassler participated in the school musicals and operas, where he also took up playwriting.

Using what he learned as a teen, Fassler has written for the Emmy-Award winning sitcom Murphy Brown and cowrote the Lifetime-TV movie How I Married My High School Crush. He also appeared in shows such as Alien Nation. Despite his success in the film and television industries, Fassler still prefers sitting in a theater watching a new Broadway production.

“I lived for 30 years in Los Angeles, working as an actor and writer, and during those years I would come to New York as often as possible to catch up on my theatergoing,” he said. “But when I moved back to New York in 2016, going to the theater once again became part of my routine as opposed to something special.”

In preparation for his book, Fassler interviewed as many actors, producers and set designers as possible, including Stephen Sondheim, James Earl Jones and Bette Midler. These interviews helped him to both relive his experiences  and understand different perspectives from successful people in the industry.

“Interviewing them was the best way to recreate this 1970s Broadway world vividly and appropriately,” he said. “Broadway has unquestionably changed over the years, and these interviews helped to depict this era in theater history.”

Fassler, who still sees shows a few nights a week, hopes that this book will not only tell readers how Broadway impacted his life, but also bring attention to the importance of drama in school settings. While this book may be comedic in some places, Fassler’s concern for diminishing opportunities in school drama programs due to budget cuts, and increasing Broadway ticket prices, ties all of his experiences together.

With his new book published, Fassler hopes to spread the message that despite the competitive nature of the film and theater industries, young actors can ultimately be successful if they devote themselves to learning every aspect of the setting they choose to work in.

“It’s not enough to just say, ‘I’m an actor. Here I am. Anybody interested?’” Fassler said. “Actors today need to be versed in writing, directing and producing. With technology making it possible to film movies on an iPhone, the ability to create your own work is a major step up when it comes to forging a career.”

Up in the Cheap Seats is available directly from Griffith Moon Publishing for $29.95, plus shipping and handling, by clicking Buy Now at www.griffithmoon.com/cheapseats. The book is also available in brick-and-mortar stores like the Drama Book Shop in New York City and Diesel Books in Los Angeles. For updates, visit www.ronfassler.org.