With two daughters, a husband, a full-time fashion career and a mission to achieve her goal as a fashion designer with her very own clothing line, Carmen Anderson has her hands quite full. 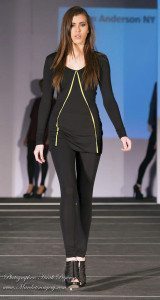 The Great Neck fashion designer has created a collection of everyday clothing essentials that she proudly calls “Comfortable with an edge!” for other busy, fit women and mothers on-the-go. The clothes are made with sustainable fabric and natural fibers to help the environment, and are produced nearby in New York City. 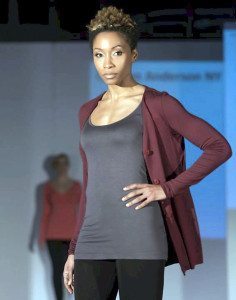 Having worked in the fashion industry for more than 20 years, it’s only natural that Anderson wanted to produce something of her very own. A Fashion Institute of Technology (FIT) graduate with a dream to be a fashion designer since third grade, Anderson has always had the idea of creating her own line in the back of her mind. Her inspiration came from her own frustration when trying to find clothes. The designer is athletic and an avid runner, and has long arms. She said she couldn’t find clothes to fit her body type and she couldn’t find any comfortable essentials to layer and throw on when she was on-the-go. 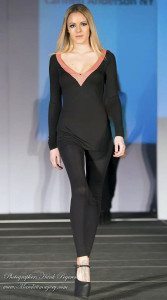 Around three years ago when she felt her second daughter was old enough, Anderson decided to create her own line. She did some research, looked for fabrics and the resources she needed, and voilà! CarmenAndersonNY was born. 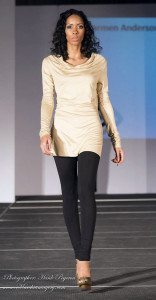 “I wanted something for me…the inspiration [for the line] was myself…something sustainable…the essentials,” she said. “[My collection of clothes is] loungy but also you can go out in them, [you can wear them to] yoga, [wear them to] have a cup of coffee with your friends, go out on the night [with them].” 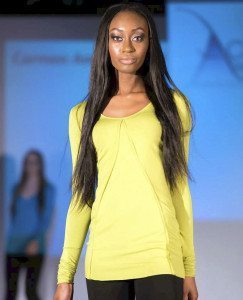 She emphasized that the collection is for “a woman that is on-the-go, a mother that takes care of the house [and] doesn’t want to take time to figure out what to wear. Ladies like myself.” She said a lot of her customers keep coming back for more and that she’s gotten a great response at expos, shows and events. 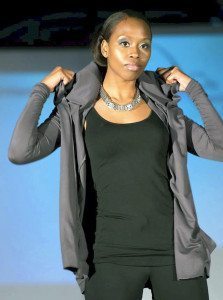 “I believe in fitness, I’m a [professional] runner for 10 years. I’m a hot yoga follower. I’m an athlete. A lot of ladies like [myself] who want to stay fit [can] relate to the collection…it’s for the woman who is more health conscious and aware of how she wants to look: healthy [and] beautiful, regardless of her age. She’s a mom, she works, she likes to have fun. You feel great [in these clothes]; everything is very versatile…[it’s] a little bit for everybody.”

At the moment, Anderson has 26 styles—nice and easygoing travel pieces—in her collection: 18 tops, six bottoms (including four pants and two skirts) and two dresses. She plans to add three more tops, one or two more dresses and a skirt very soon.

“It’s all year-round essentials that will never go out of style and you can wear 10 years from now,” she said. “You can dress it up and dress it down,” and 90 percent of the time she wears her clothes and describes them as, “like butter, when you feel it on your skin.”

Anderson’s collection can be found at three shops: Red Hots Sun Lounge and Spa in Roslyn, Yvette Lingerie in Bayside and Rain Spa & Boutique in Huntington Station, as well as online at www.carmenandersonny.com.

Does Anderson plan to open a boutique of her own? She said, “The sky is the limit!” She may in the future, but as of right now the collection is at her house and at those three boutiques. In the future, she also wants to create a men’s line. 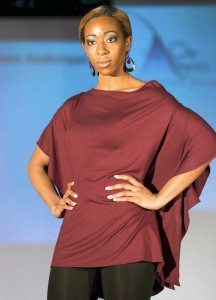 Although Anderson has now lived in Great Neck with her husband for the past 20 years, she is originally from the Dominican Republic. Her father was an artist and her mother a dress designer, which she believes is a combination of her talents as a fashion designer. She came to the U.S. in the mid-1980s at age 19, without knowing how to speak English, and started here with nothing. Her father helped her come to America so that she could study fashion design. Back in her country, she went to school for advertising, which was the only degree closest to fashion. Anderson did not have enough money to start school immediately. So, she worked her way up. She learned English in just three months. She had to “work from the bottom” at small jobs, such as in factories and McDonald’s at minimum wage, and then went onto retail. She struggled tremendously, but she eventually climbed up the ladder to manager positions in retail. “I had a goal, I had a mission. I used to say to myself, ‘this is just going to be temporary, this is not going to go on forever.’ Sure enough, one thing led to another; [I] stumbled many times but I never gave up and I wanted to go to FIT. I didn’t stop.” 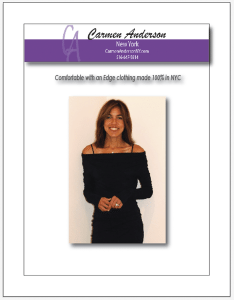 Anderson’s can-do attitude and her strong belief that she came here on a mission to achieve her dreams pushed her to accomplish her goals. She was able to get into FIT and earn her fashion degree. “I consider myself a survivor, somebody who is really following a dream like anybody who comes to America, and this is my dream right now (besides my beautiful family, of course)…my dream of being a fashion designer, my dream since third grade,” she said.

As far as following your dreams, Anderson believes, like a true motivational speaker, “You have to believe it [can] happen. You have to persevere. You can’t let negativity get to you just because you have an accent. You will be discriminated at some point, [but it] doesn’t mean a door isn’t open. I’ve been through it and I know it. I never came up with reasons not to be able to do what I want…I’m still trying with my [fashion] business right now. [There are] a lot of obstacles still, but I’m going to break those obstacles; I’m not going to let [them] get to me,” Anderson explained.

So, if you’re a woman on-the-go who wants comfortable clothes “with an edge,” support your neighbor and shop at www.carmenandersonny.com.