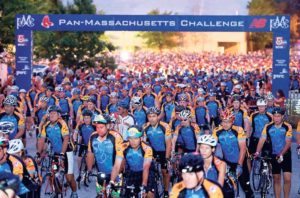 Four Great Neck residents, Adam Wittenstein, Alan Blondman, Alexander Schifter and Douglas Spector, will each cycle up to nearly 200 miles on Aug. 6 and 7 to raise funds for cancer research and care in the hope of helping raise $46 million.

The cyclists will participate in the Pan-Mass Challenge (PMC), an annual bike-a-thon that’s the largest single athletic fundraising event in the world. They will be among 6,500 bicyclists who will ride to support adult and pediatric patient care and cancer research at Dana-Farber Cancer Institute.

Riders from more than 40 states and seven countries will return to Massachusetts to participate in the PMC, choosing from 12 routes of varying lengths that run through 46 towns. 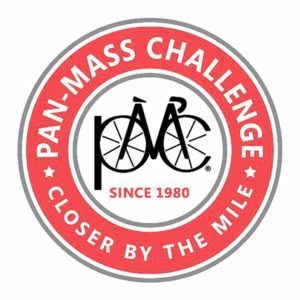 These cyclists, who are between 13 and 84 years old, range from seasoned triathletes to weekend warriors who trained for this event. Many riders participate in the PMC to honor a family member or friend lost to, or being treated for, cancer. The average cyclist trains for three months, solicits 40 sponsors and raises more than $8,000.

Doctors ride alongside patients; grandparents ride with grand-children and others show support from the sidelines in the form of donations and well wishes. More than 600 riders and volunteers are cancer survivors or current patients, considered living proof of the PMC mission to find a cure.

“I will be bike riding 50 miles to raise funds for research, because I want to help rid the world of cancer,” said Wittenstein, who will be participating in the PMC for the fourth consecutive summer. “My cousin Jared fought a remarkable fight against brain and spinal cord cancer for 2½ years,” he continued. “In 2005, at just 21 years of age, he lost his heroic fight. In his honor, the Jared Branfman Sunflowers for Life Fund for Pediatric Brain and Spinal Cancer Research was established. Over the past three years, I have raised more than $4,500.” This year, he’s committed to raising an additional $2,000 by Sept. 30. 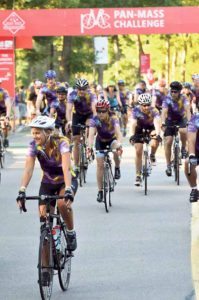 “When I think back over the past rides, it is no mystery why I ride,” said Blondman, who will be participating for the sixth time. “In life, it is not too often that we can feel like we are really making a difference, and this event shows that with a little effort on my part, change can occur.”

This will be Schifter’s second year riding. “I’m a proud supporter of the PMC because it is leading a charge to beat cancer,” he said. “In fact, last year 100 percent of rider-raised revenue went directly to support the Jimmy Fund and Dana-Farber Cancer Institute’s commitment to finding a cure.”

Spector is training to complete his 11th consecutive PMC, a 200-mile two-day bike ride across Massachusetts from Sturbridge to Provincetown. “This year, I will again ride to honor the memories and celebrate the lives of my sister Dana and Ossie’s dad, Jakob Mogilnik, as well as countless others who are either battling or who have succumbed to this insidious disease,” said Spector. “I will again join my college friends together with this group of more than 6,000 cyclists from 40 states and seven countries and ride my bike 200 miles from Sturbridge to Provincetown in an attempt to meet my fundraising goal of $20,000.” 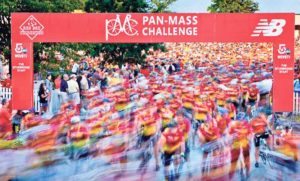 Billy Starr, founder and executive director of the PMC, said, “Each year, the PMC is proud to welcome riders and volunteers with unique backgrounds and experiences, from all over the country and all over the world, into our family. This is what makes ride weekend such an impactful and inspiring event. In 2016, we are honored to have more than 6,500 cyclists joining us to ride for a cure and help surpass this year’s $46 million fundraising goal.”

No other single athletic event raises or contributes more money to charity than the PMC. Since 1980, the PMC has raised more than a half-billion dollars for Dana-Farber through the Jimmy Fund, its fundraising arm. In fact, the PMC is Dana-Farber’s largest single contributor, raising more than 58 percent of the fund’s annual revenue.

The PMC is presented by the Red Sox Foundation and New Balance. To make a financial contribution to a rider or become a virtual rider, visit www.pmc.orgor call 800-WE-CYCLE. Connect with #PMC2016 on Facebook, Twitter, Instagram, Pinterest or LinkedIn.