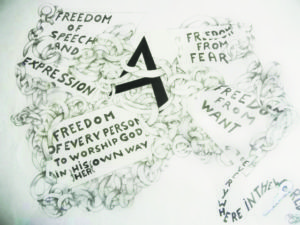 Great Neck artist Marion Gerrick Cohen’s illustration “Four Freedoms,” a piece created to commemorate Franklin Delano Roosevelt’s Jan. 6, 1941, State of the Union Address—also known as the Four Freedoms Speech—can be seen in the halls of the New York State Veteran’s Home in Stony Brook. In Roosevelt’s speech, the only four-term U.S. President in history explained the four essential freedoms that all people are entitled to: freedom of speech, freedom of worship, freedom from want and freedom from fear, all of which are depicted in Cohen’s piece. The Stony Brook home was selected for permanent placement of the piece due to its reputation of excellent care for World War II veterans, who fought and sacrificed so that people everywhere could enjoy those four freedoms.