The opening reception for the Gold Coast Arts Center’s (GCAC) latest exhibit, Creative Crossroads, featuring the work of Luis “Zimad” Lamboy and Adam Handler, will be held on Sunday, May 7, from 4 to 7 p.m.

“One can see in these two artists’ work an interconnected world where even though the shapes and figures are similar in aspect, their individual styles nonetheless distinguish each of them as unique,” said Gallery Director Jude Amsel. “Themes and stories begin to unravel as each artist enters a creative crossroad between the past and the present. The balance of color and contrast contribute to the captivating mood, which is dreamlike and ever-changing.”

Lamboy was born in the South Bronx in 1965. In the late ’70s, he began his career as a graffiti and street artist, which has heavily influenced his style and global brand. He attended the Fashion Institute of Technology in New York City from 1988 to 1990, where he studied textile surface designing after being awarding a scholarship. As a self-taught artist, he began to combine his skills with formal training in design to develop the unique and contemporary styles he is best known for today.

His first show was in 1984 at Fashion Moda, a gallery best known for first showcasing graffiti art. Since then, he has showed and sold his work globally including exhibitions in the U.S., Russia, France, United Kingdom, Switzerland, Amsterdam, Philippines, Vietnam, Ecuador, Panama and Netherlands. His clients include many major brands such as Nike, MTV, Modello, Corona, Red Bull, Lions Gate Films, Jacob & Co. and State Farm, as well as many private clients and celebrities. He has appeared in dozens of documentaries and has been interviewed and invited to participate in shows and projects all over the world.

Handler was born in Queens and grew up on Long Island. As a child, he spent countless hours at his grand-parents framing factory in New York City, where his passion for the arts grew. As a college student, he studied life drawing in Italy and graduated from Purchase College with a major in art history. He has also studied craft design with Jorge Nieves and printing color photography with Debra Mesa-Pelly. 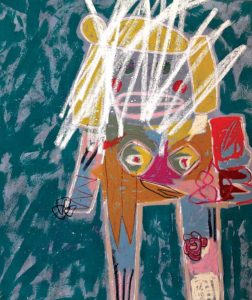 Handler has exhibited his work in New York City; Greenwich, CT; Canada and Texas. He continues to create new series of works, which include painting, sculpture and drawing.