Gabriel Lefkowitz has a passion for athletics. The recent Great Neck South High graduate was a member of the school’s soccer and basketball teams for four years. In his junior and senior years, he also participated in track and field.

In soccer, Lefkowitz played center back and was in charge of directing the defense. He was primarily responsible for defense in basketball, as well. Despite playing a position that rarely receives due credit, Lefkowitz always looked forward to contributing in the underappreciated role.

Lefkowitz’s devotion to athletics began at a mere 5 years old.

“I really got into sports because of my siblings,” Lefkowitz explained. “My brother, who lived in Illinois, loved soccer and basketball. He kind of awakened me to how much fun they were. Even now, whenever he visits, we always play some one-on-one basketball.”

Earlier this year, Lefkowitz received the Outstanding Physical Education Award from the Nassau Zone of the New York State Association for Health, Physical Education, Recreation and Dance (NYSAHPERD). Honorees are recognized for leading a physically active and healthy lifestyle, and demonstrating qualities such as citizenship, character and good sportsmanship. Lefkowitz was one of only four students from the Great Neck Public Schools to earn the honor.

The multi-sport athlete was one of 91 South High students honored by the Great Neck Public Schools Board of Education for contributing to the quality of life at the school.

A true star, Lefkowitz was immediately recognized as one of South High School’s top athletes.

“Gabe is an all-around athlete who excels at everything he does,” said Thomas Umstatter, former South athletic director.

For athletes like Lefkowitz, sports are far more than just a game. Rather, they are opportunities to improve and excel. In track, Lefkowitz was always motivated to be the best.

“I love the fact that when playing sports every day you can be conscious of how much you improve. This is especially true in track,” Lefkowitz said. “My best races were the ones where someone was right in front of me. I loved to chase people down; that is what spurred me to best my previous times.”

Off the field, Lefkowitz participated in a number of clubs throughout high school. He served as president of the environmental club as well as managing editor of the school’s newspaper.

This fall, Lefkowitz begins a new journey as he embarks upon his next chapter at Middlebury College. 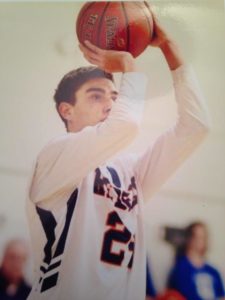 “Athletics were definitely a factor for me,” Lefkowitz explained. “Middlebury has a very nice gym complex and its own ski mountain, two big reasons persuading me to apply.”

Although the talented athlete does not plan to join any sports clubs, he intends to continue playing in his spare time.

Academically, Lefkowitz’s favorite subjects in high school were AP Environmental Science and AP World History, and he is interested in studying environmental policy at Middlebury.

In his free time, he enjoys reading and running.