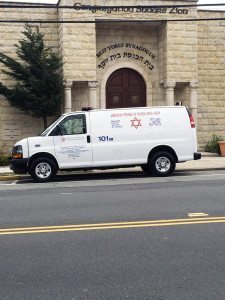 Nearly 100 people gathered at Congregation Shaare Zion of Great Neck to celebrate a huge accomplishment: the community’s $100,000 fundraiser to donate an entire ambulance with all the necessary equipment to Magen David Adom, Israel’s ambulance, blood-services and disaster-relief organization on Sunday, March 13. 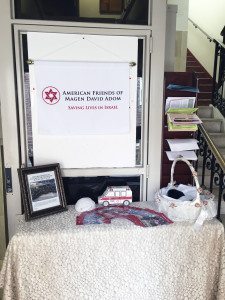 Although not government funded, Magen David Adom (MDA) was officially founded in Israel in 1930 to provide medical assistance to soldiers and civilians throughout the state. Serving more than eight-million people, MDA is an organization where young EMTs and paramedics devote themselves and their lives to saving others. Its American counterpart, American Friends of Magen David Adom, was an initiative in the United States to raise money and collect equipment for MDA as it grew. It is because of people like Gigi and Gabi Aharoni, chair people of Congregation Shaare Zion in Great Neck, and avid supporters and advocates of Israel, that MDA receives so many donations.

Inspired by her son who volunteered for MDA in Israel, Gigi Aharoni wanted to devise a plan to help MDA significantly, and a fundraiser for an ambulance began in Great Neck. Along with her close friend and neighbor Madelyn Cohen, a development executive for American Friends of MDA, Aharoni had a vision to unite Great Neck citizens in an effort that truly contributed to MDA and Jews in Israel.

Aharoni possesses a deep love for Israel, and her excitement and passion carries to hundreds of people thousands of miles away. “Fundraising for the ambulance donation became a community-wide effort that crossed religious boundaries,” Aharoni said. Whether it was $18 donations from Facebook friends, larger donations (in multiples of 18, which is a significant number to Jews because it signifies chai—life) from the Aharonis’ close friends, or money from synagogues and Jewish organizations in Great Neck, so many people of different backgrounds contributed to this cause of helping people in Israel. 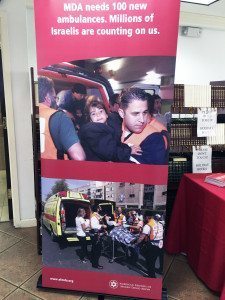 “[Fundraising for the ambulance] is the definition of a grassroots campaign,” Cohen said in her remarks to the congregation. “There is no greater mitzvah [good deed] than this.” Thanking some of the ambulance’s biggest donors, such as Josh and Mia Setton, Joe and Cori Franco, Temple Israel’s Israel Solidarity Fund and The Cherry Lane Minyan, she and the Aharonis were so grateful for the love and help they received for this project. Aharoni also mentioned Temple Israel, whose congregants collectively contributed $5,000 to the cause, and said how meaningful even the smallest donations were from people—even strangers—she stopped at local supermarkets.

The community was very spirited and excited to see the ambulance for which it had raised money. Hosted at Congregation Shaare Zion, the service and luncheon to celebrate the community’s fundraising efforts was well-attended with several dozen guests: people who donated money for the ambulance, volunteers of MDA, close family and friends of the Aharoni family and members of the synagogue. 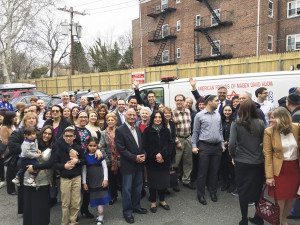 As attendees gathered inside the building’s reception room at noon, congregants of all ages mingled, drank coffee and observed the ambulance, which was parked right outside. Cohen arranged for the American Friends of Magen David Adom to set up tables with wristbands, flyers and other supplies that promote the Israeli organization. 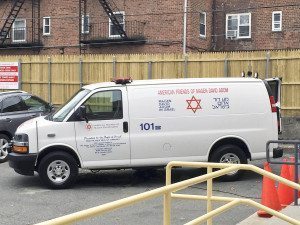 The Aharonis and Rabbi Adam Acobas welcomed guests into the sanctuary for a short, celebratory service. Beginning with the singing of both the Israeli and American national anthems, Rabbi Acobas first gave his remarks. “This is a day of great joy,” Rabbi Acobas said. He expressed his hopes that the donated ambulance be used in Israel only to bring life into this world. However, given the devastation of war, he said, “We must help our brothers and sisters in Israel.” Rabbi Acobas concluded by leading the group in the singing of the “Misheberach,” a prayer for peace in Israel.

The Aharoni couple and Madelyn Cohen all expressed their gratitude to everyone in the room. Gigi Aharoni spoke of her deep love for and connection to Israel as well as her inspiration for the project, and explained how she raised the money.

A plaque commemorating the community’s effort is hanging in the synagogue and will be cherished forever. After the plaque presentation, the Aharonis invited guests outside for the ribbon cutting ceremony. Accompanied by live music and Israeli songs, everyone clapped as the red ribbon was officially cut in front of the ambulance. Aharoni and her family beamed with pride as guests were cheerfully smiling. 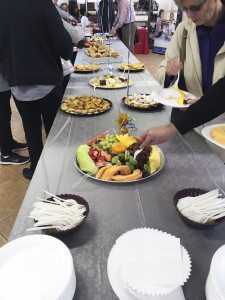 The afternoon concluded with a luncheon in the reception room, where several platters of fruit, vegetables, salads, bagels, spreads, pastries and waffles were served.

Children as young as three years old danced to the live music. Keyboardist and vocalist Sandy Schmuely kept the mood upbeat and proud. Adults chatted with neighbors and fellow congregants, and all thanked and congratulated Aharoni for organizing the community’s fundraising efforts.

It was a fantastic afternoon to celebrate the joy, dedication, commitment and selflessness of Great Neck, Congregation Shaare Zion and the Aharoni family.