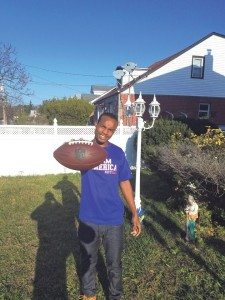 “It was like a movie, man. It was incredible.”

Mcgregory Frederique hasn’t lost sight of the unlikelihood of his journey; a journey that has taken him from a job as an assistant at a law firm to being a few well-timed performances away from a pro football career.

Frederique, 30, was born in Harlem and moved to Elmont “10 or 11 years ago.” He had been an athlete as a kid, finding his abilities came fairly naturally.

“Throughout my whole life, I was involved in sports,” Frederique said. “I joined the track team in elementary school. I played soccer, basketball, baseball, swimming. I’m the type of guy, I learn instantly. I’m quick.”

That instantaneous learning paid off in late 2014 when, while working at Sharman Shabab Law firm in Mineola, Frederique got the urge to give football a try. He was inspired while watching his favorite film, Draft Day, starring Kevin Costner.

“I was anxious to play,” Frederique said. “I didn’t really care if I got a concussion, broke my legs, anything like that. I wanted to play because I was capable of doing it. [It was] something new, something for a change. I don’t want to hear ‘I should be doing this or I should be doing that.’ Something I want to do. It’s your life. It’s my role, my journey. That’s why I pursued football.”

Frederique, feeling that he was already in top shape, called his friend from college, Amari, who he credits as the first person to teach him about football. The two began training and practicing, with Frederique making an effort to learn the ins and outs of the game. In January 2015, he received a call asking him to come to a meeting for the Westchester Steelers, a semi-pro team. Frederique impressed them with his speed and saw action as a punt returner, despite having never even put pads on prior to his first practice with the team. Until that point, Frederique’s only football experience had been street pick-up games with his friends.

“It was fun,” he said of his time with Westchester. “From there, I didn’t really get the opportunity I wanted to. But it was pretty cool. I had played sports in high school, but when I got to Westchester Community College, they ended their program. That dream just started fading away.”

As he had before, Frederique kept football in the back of his mind, unsure of whether the possibility of furthering his career existed. That changed when, this past July, a developmental team called Team America launched. Of the thousands of players who sent highlight videos to the team, Frederique was chosen for the roster.

“This is the opportunity of a lifetime,” he said. “We’re going to have NFL scouts down there, CFL scouts, arena football scouts. We’re going to play in front of 10,000 people in Daytona Beach. What else can I really ask for?”

Frederique, while remaining determined, also pointed out a potential bump in the road: his age. While 30 would be considered young for most jobs, professional football, a punishing and physically-demanding occupation, is a different story. But Frederique remains confident that his conditioning and desire to succeed can get him to the top.

“[Long snapper] Nate Boyer just had a tryout with the Seahawks,” he said. Boyer, at age 30, had been a walk-on at the University of Texas despite having never played organized football and, at 34, had been on the Seattle Seahawks preseason roster a year ago. “He’s older than I am. If he can get that opportunity, I know I can. I want to make the impossible possible.”

Frederique has managed to apply that mantra to all that he does; he has written a book about relationships, titled The Spoken Truth, which is set to be published soon. He also has been approached by screenwriters about possibly adapting the work into a film. It’s not every day that an aspiring football player writes a book about love, but for Frederique, love and football are intertwined.

“The game of football, it’s just the momentum,” he said. “The game itself, it makes you become a man. It’s not only because of glory, fame and all the money. It brings out another person inside of you. It’s like love. If I see something I love, I’m going for it.”