A tragedy inspired Sharyn Schneider to bring beauty into the lives of the residents at the Margaret Tietz Rehabilitation and Nursing Center in Jamaica Hills. Founded in 1971 to serve Holocaust survivors, the nursing home’s grounds had the framework for a beautiful garden where patients could enjoy the outdoors, but the barren space didn’t even have one flower until Schneider founded Project ReBloom and began planting last September.

A year later, the garden is in full bloom and a ceremony was held to dedicate the colorful space to the woman who inspired it.

Schneider first visited the garden when her friend, Fay Dor, the victim of a hit and run on Middle Neck Road, was recuperating at the facility.

“She jogged, took yoga classes, belonged to a bicycle club and always ate healthfully,” said Schneider. “She was in really good physical condition but all that changed in an instant. She was crossing Middle Neck Road in the Old Village on that summer night and, as a result of the hit and run, she became totally paralyzed.”

After months in the hospital, Dor was transferred to the Margaret Tietz Rehabilitation and Nursing Center, where her days were filled with listening to books on tape, music and watching TV. 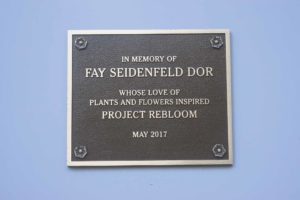 “Her windowsill was filled with plants that visitors had brought, but even that was a problem because an aide had to be asked to water them,” explained Schneider. “I started to bring succulents, which needed very little care and she liked that a lot.”

This formerly active woman was confined to her room for nearly a year until Schneider discovered the outdoor garden at the rehab center. 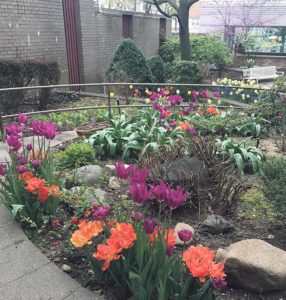 “On a beautiful day last July, I convinced Fay to go out to the garden,” said Schneider. “The place was really nice. There was a fountain, large planters, a sprinkler system and paths for wheelchairs, but we were very disappointed that there wasn’t a flower in sight. When I told Fay that I wanted to make the garden live again, she was very happy and even excited about it.”

Schneider said that her “Martha Stewart genes started working,” and when she went back for another visit, she approached the administration with her plan. She was told that a thriving garden once existed, but they lost the gardener and soon after the plants. 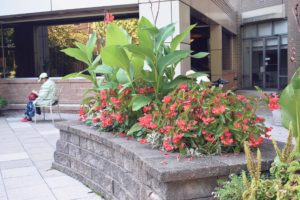 “I wanted to create color and a beautiful place for the 200 residents of this five-star facility,” said Schneider. “The residents are physically disabled, frail elderly and people with chronic health problems, but they make the most of every day.”

Schneider knew there were many volunteers who would help with digging and planting and that the maintenance staff would help with watering. So, she sent a letter to friends and local garden centers explaining her plans for Project ReBloom and asking for their support. 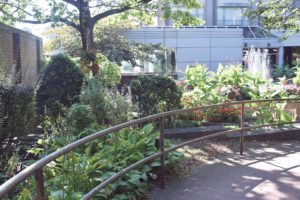 “The response to my letter was more than either of us hoped for,” said Schneider. “Fay looked through the bulb catalog and chose the tulips and daffodils for spring. Project ReBloom was happening.”

Everyone was getting excited—and then Schneider received devastating news. 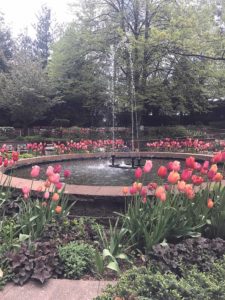 “I got a call from Fay’s son telling me that she had died,” said Schneider. “It was shocking to everyone. It was sudden and totally unexpected. The garden was now going to be a memorial to the person who inspired it.”

Schneider is thrilled that she could bring this garden back to life and is grateful for all of the help, especially from Linda Spiegel, director of the facility’s public affairs.

Donors, planting volunteers and Dor’s family recently attended a thank-you cocktail party and a plaque was dedicated to the memory of the woman who inspired the transformation. 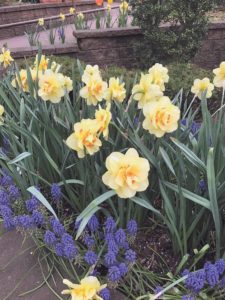 “Project ReBloom is living up to its name. This neglected garden was brought back to life,” said Schneider. “Art therapy classes are now held in the garden and the residents and staff couldn’t be happier to have this garden therapy. I’m told all 200 residents look forward to going outside and are smiling when they get to the garden. The visitors and staff are so grateful for the beautiful surroundings and the happiness that the garden has brought to the residents. One visitor even told me that the tulips were ‘better than the Brooklyn Botanical Garden.’ People who understand what ‘flower power’ truly means are welcome to join our volunteers.”