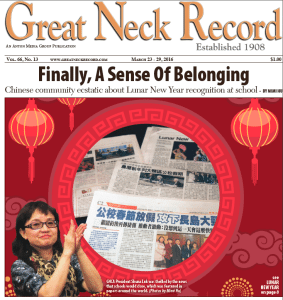 Chi Zhang, a resident of Great Neck Estates, usually spends his weekday evenings with his three children, helping them with homework and figure skating training. But, on Monday, March 14, Zhang took off from work early, left his children around 8 o’clock and dashed over to the Great Neck North High School auditorium. It was his first time attending a Great Neck Board of Education meeting.

In the crowded auditorium, Zhang was joined by more than 30 Chinese parents from the community, many of whom brought their sons, daughters and other family members. They all came to witness and commemorate, in Zhang’s words, “a historic moment” in Great Neck’s history—Lunar New Year would be announced as an official school holiday at this meeting.

For many Chinese people around the world, their most treasured memories of growing up revolve around celebrating Lunar New Year with their families each year. Yet, for years, Chinese-American students and their families in Great Neck had to choose between observing such an important holiday and missing school. The Lunar New Year celebration is not limited to Chinese culture as it is also an important holiday in many other Asian cultures.

The school board did not approve the Lunar New Year petition initially. It noted that further investigation into the district student body ratio was needed. Moreover, it also had to solve scheduling conflicts while meeting the state requirements for school days. It was not until a few days before the board’s March meeting that the Chinese American community was notified of its decision to add Lunar New Year as a recognized school holiday.

Great Neck Public Schools Superintendent Dr. Teresa Prendergast called this a “right move” and that it was “her pleasure to have supported this decision.” Her investigation revealed that Asian students currently represent 34 percent of Great Neck’s overall school district enrollment. She concluded that “there’s no question this decision by our board of education reflects the changing demographics of our community, and the important significance of this holiday for the residents of Great Neck.”

Chi Zhang was probably correct in calling this March board of education meeting a historic event. When Board President Barbara Berkowitz was delivering the official announcement to make Lunar New Year a school holiday, the front row of the auditorium was surrounded by journalists, a rare phenomenon for a school board meeting. The Great Neck Record, SingTao Daily, World Journal, Newsday and FiOS1 were among the many news media that sent its reporters to this event.

After all, the announcement made Great Neck the first district on Long Island to honor Lunar New Year as an official school holiday. It is rumored that many other districts on Long Island, such as Jericho which also has a growing Asian American population, had been closely watching the developments in Great Neck.

When Zhang went home after the meeting that night, his children were already fast asleep. He posted the videos he took at the meeting to various online Great Neck Chinese Association (GNCA) groups, whose members shared his excitement. GNCA expressed the community’s joy and gratitude in the thank-you letters that it sent out to the board of education, Great Neck Teachers Association and the superintendent.

To read about the communities’ pleas at the previous board meeting, click here.

For Zhang, Lunar New Year recognition was especially significant because it made him feel a sense of finally belonging here in Great Neck. Zhang’s future plan for the Lunar New Year celebration is to take a day off from work and stay at home with his family, as the weather is often too cold for his family to go anywhere. Zhang said, “We will just celebrate the Big Year* like how I did when I was growing up in Beijing.”

*In Zhang’s dialect, Big Year is an endearing name for Lunar New Year.