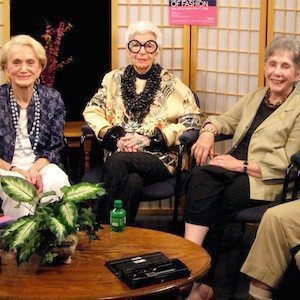 Iris Apfel, a flamboyantly dressed icon, has had an out-sized presence on the New York fashion scene for decades. Now at 93, she is front page news as the subject of a documentary film Iris. In 2008 when she was the star of  the “Iris Apfel, Rare Bird of Fashion” exhibit  at the Nassau County Museum of Art. It featured her clothes, accessories and jewelry. She was Shirley Romaine’s guest on Artscene on Long Island. The interview is being shown from Romaine’s Artscene archive on Fridays, June  12 and 19, at  3 p.m., and on Monday, June, 15 at 6:30 p.m. on Cablevision’s Channel 20 and Verizon’s Channel 37. Iris Apfel is shown with Shirley Romaine and Joanne Olian, curator of the Nassau County Museum of Art 2008 exhibit “Iris Apfel.”