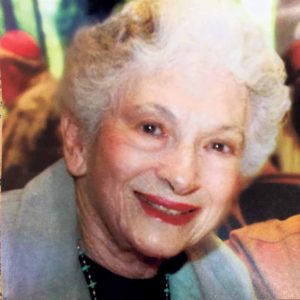 Faith was the oldest of three children of Sally and Saul Gladstone of Brooklyn. She was loved immensely and respected by everyone who knew her. She was a dedicated wife, mother, grandmother, teacher, educator, mentor to young teachers and community leader. She was preceded in death by her husband of 71 years, Louis Marshall, and is survived by devoted children, Ellen Ruth Marshall (Robert Arnold) of Villa Park, CA, and David Aaron Marshall (Maija Freimanis) of Chicago; grandchildren, Astrid Carla Marshall (Jefferson Li) of New York City and Max Benjamin Marshall of Brooklyn; as well as her brothers Marvin Gladstone of Albuquerque, NM, and Alan Gladstone of Geneva, Switzerland.

Faith studied English literature at Brooklyn College, graduating in 1944 with a BA degree and teacher’s certificate. She bravely traveled across the country alone, by train, to work as a teacher at the Tule Lake Japanese American Internment Camp in California during World War II, teaching and caring for young Japanese children in the camp. Her recollections of that experience are moving and revealing.

In 1945, she moved to Houston to marry her high school sweetheart, Louis, a chemical engineer. She taught in the Houston public school system for two years, after which she and Lou returned to New York. Faith subsequently studied at Columbia University School of Social Work and earned a master’s degree in education at Adelphi University. She also earned certification as a school administrator from Hunter College.

For many years, she was a teacher in the Great Neck Public Schools, eventually serving as principal at the Cumberland and Lakeville schools. She had a natural talent for teaching, and was rewarded with innumerable cards, letters and remembrances from her devoted students and staff. She was known for her sensitive approach to unlocking the distinctive potential of each child.

Faith and Lou returned to Houston in 1977. At age 58, she entered the University of Houston, receiving her doctorate degree in 1983. She continued her work in education as principal of the I. Weiner School and as a faculty member at the University of Houston College of Education. Her focus was on mentoring first-year elementary school teachers in becoming more effective in the classroom and in overcoming the formidable hurdles face at times by young educators. She developed and implemented a highly successful program that proved to be ahead of its time for the intensive support of first-year teachers. She was also especially proud of her National Defense Education Award Scholarship and three Kettering Foundation Fellowships for the advanced study of educational administration.

Faith was an active participant in her synagogue and community. During the 1960s in New York, she cochaired interfaith campaigns to reconstruct the A.M.E. Zion Church, and to build a senior citizens center in Great Neck. She was among the founding trustees of Temple Isaiah of Great Neck.

Even after retiring from the University of Houston in 1998, she continued to volunteer, teaching parenting classes to people referred from the court system, and working at the DePelchin Children’s Center. She devoted much time and energy to Congregation Beth Israel, chairing the Horvitz Scholar in Residence program for three years. For nine years, she ran Coffeecake and Conversation, in which congregation members shared their varied areas of expertise. She was honored as Beth Israel Sisterhood’s Woman of Influence in 2004, and she received the Helene Susman Woman of Prominence Award from the American Jewish Committee in 2009.

Faith Marshall will be remembered for her tremendous generosity. She contributed to the lives of everyone she touched. She had only kind words and encouragement for her family, friends, students and colleagues. She was a master at involving the children around her in creative learning. Even while on vacation on remote Drummond Island, MI, she arranged a reading session for local youngsters and her own grandchildren at the local library, an event that Astrid and Max still remember with amusement.

The family acknowledges with special gratitude the loving care provided in recent years by Catalina Alvarez. The funeral was held Monday, Jan. 16, at the Proler Family Chapel at Beth Israel Memorial Gardens Cemetery.

In lieu of flowers, the family requests that donations be made to the University of Houston’s Faith Gladstone Marshall Endowment Scholarship, or to a charity of the donor’s choice. The scholarship was established in her honor by her daughter, Ellen Marshall, and is awarded to an undergraduate or graduate student who has demonstrated a commitment to civic improvement through his or her work and community service, and a realization of individual potential through education. Donations can be mailed to University of Houston System Donor and Alumni Records, PO Box 867, Houston, TX, 77001-0867, or made by calling 877-755-0559.