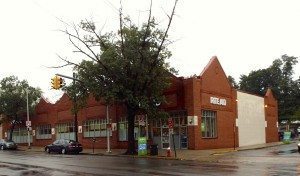 A collective sigh of relief from the residents of Great Neck Estates and Kensington could almost be heard last week after they learned that Estates Mayor David Fox had announced that Shop Delight’s attempt to secure a permit to open another supermarket on Middle Neck Road between the two communities was over.

Fox declared an end to the application (under the name of Great Neck Gourmet, Inc. at 4 Welwyn Road, where it is currently doing business), at the July 13 Board of Trustees meeting because of the applicant’s failure to adhere to a July 10 deadline to submit necessary paperwork.

It’s possible that Shop Delight could reapply to occupy the 14,500 square foot space at some point, but a new application would force the applicant to start the process from the very beginning.

When reached, attorney Alan M. Stein, who represented Shop Delight in the application, did not wish to comment on the situation or as to why his client had apparently decided not to continue.

The application, started last fall, had caused great anxiety in the Estates, Kensington and also in Great Neck Plaza because of its anticipated negative impact on traffic, safety and quality of life. The perceived inadequacy of the municipal parking lot behind the proposed location (in the now closed Rite Aid branch) regarding its ability to handle increased customer parking and large truck deliveries was also a major factor.

The Plaza had become particularly concerned when it was learned that one of the store’s possible solutions to the problem of large deliveries would have been to regularly shuttle merchandise to the new store from the Welwyn Road store.

Highly pleased by the apparent end to the store’s efforts to open another branch was Bruce Funk, president of the co-op at 160 Middle Neck, the building that is adjacent to the municipal lot. Upon hearing the news, Funk, who has been on his 69-unit building’s board for 15 years, sent letters thanking both Fox and Kensington Mayor Susan Lopatkin for their support in opposing the supermarket.

“It is you, David, your trustees, and legal counsel that we owe much to,” wrote Funk, whose building had legal counsel in its fight against the project. “Your fair and objective view points, proved unquestionably…that your true concerns are in protecting the ways of life of your village. This, as long as you have been mayor, and I know you, has been your priority.”

“From the last meeting in June, the board gave Shop Delight three options,” said Funk. “They could have left the application as is, amended it or closed it.

“They gave Shop Delight a July 10 deadline to respond as to their intentions,” Funk explained. “If they did not respond by that time in any way they were told that the application would be null and void and they didn’t respond.”

“We had 99 percent support,” said Funk of his fellow residents. “They were dreading something like this if it passed.” He also added that the co-op residents of the 96 apartments across the street at One Kensington Gate also gave overwhelming support.

“We are certainly pleased by the outcome,” said Mayor Lopatkin. “We were very concerned about the impact on the surrounding community and on the peninsula and we think that the board of trustees of Great Neck Estates and Mayor Fox did a wonderful job of listening and requesting more information from the applicant and asking for more studies. I commend them for taking the necessary steps in evaluating the application.”

“Some of the objections that our village raised were very legitimate and needed to be addressed,” she continued.

Lopatkin also spoke about the key intersection where Beverly Road and Nassau Road converge into Middle Neck, directly across from where the store was to be opened. “The biggest thing to overcome was the fact that you’d have, potentially, a significantly large increase in traffic funneling into a one lane road through downtown Great Neck,” she said. “You can’t fix that.”

Shop Delight’s own consultant had previously estimated that 125 to 135 customers per hour would be visiting the new store at peak times.