Great Neck Estates village officials recently voted—not unanimously, and certainly not without reservations—to adopt a draft decision on a controversial new housing subdivision known as the Old Mill II project at their Aug. 27 Board of Trustees meeting.

In a vote of 4 to 1—with Deputy Mayor Jeffrey Farkas being the only dissenting vote—officials officially paved the way for subdividing Clover Drive to make way for 11 new single-family homes situated within a cul-de-sac. Ten of these homes will be located in the Village of Great Neck, with the 11th within the confines of Great Neck Estates. In addition, the project also involves the construction of a local private access road for residents of the new homes, as well as a new traffic intersection.

The decision to approve the very unpopular measure, according to Mayor William D. Warner, was the hardest of his tenure thus far.

“I’ve been on the board since 2001, and this is without question the toughest issue that has ever been put in front of us since I’ve been a member of this board,” he said. “When I first heard of this project, I attended the meetings in Great Neck Village. First, they wanted to put up a 96-unit apartment building, and now we have in front of us this project, which creates 10 new homes in Great Neck Village and takes one of our homes, razes it, builds a new one and puts a road in. With the exception of the $1.1 million payment the developer would be giving us to mitigate the effects of this project, any and all other potential effects of this project upon our village are negative.”

The Village of Great Neck Board of Zoning Appeals initially approved the proposed Old Mill II subdivision, located on a three-acre plot of woodland located between Old Mill Road and Clover Drive, in May of 2014.

Trustee Howard Hershenhorn expressed that his desire to support the measure was driven by the incredibly rough—and potentially very expensive—uphill legal battle the Village of Great Neck Estates would face if they were to oppose the project. In addition, he cited the willingness of the developer to strictly adhere to safety measures as well as other concerns and requests expressed by the village.

“The applicant has dotted every ‘I’ and crossed every ‘T.’ They’ve worked extremely hard to comply with everything that we’ve asked for,” he said. “In addition, we have been advised by counsel that the likelihood that we would lose in the appellate realm is great. I am an attorney as well, and it is my belief that because of the work done by the applicant and their compliance with every requirement, they have put us in the position that if we deny this application we will forfeit in excess of $1 million that the applicant has agreed to pay us, in addition to hundreds of thousands of dollars in legal fees.”

Mayor Warner noted that the Village of Great Neck had put Great Neck Estates into an untenable position, legally speaking, leaving officials with little option other than to reluctantly approve the measure, despite concerns of both trustees and residents.

“I’m troubled by this, but there’s nothing we can do about it…the Village of Great Neck has backed us into a corner by approving what they needed to approve for the subdivision,” he said. “We’re troubled by it, and there’s nobody that I’ve talked to that is in favor of this project as far as our residents are concerned. Nobody wants these new homes behind a beautiful road like Clover Drive.”

Deputy Mayor Farkas, who resides on Clover Drive and who cast the lone vote against the measure, said that a great many factors figured into his decision. 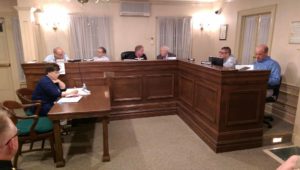 “Our village will not be collecting taxes, nor have jurisdiction on the 10 new homes. While these homes are legally in the Village of Great Neck, we view it as an extension of our village,” he said. “These homes do not conform to the character of our village, a new proposed intersection and increase in traffic where the houses are will not be safe, and parking on Clover Drive will be impacted, especially for the residents who attend events at the Young Israel of Great Neck.”

Farkas noted that every member of the board spent countless hours performing due diligence on the project, and he praised them for their efforts and dedication. Nonetheless, several residents at the meeting expressed outright anger at the decision of the board to approve the measure, including Zelda Berger, who resides on Clover Drive.

“This is disgusting…I feel that the board has been paid off,” she said. “Nobody who lives here wants this, and I feel that they will eventually build an apartment complex there, which is ridiculous. These people on the board don’t care about us.”

The project is being managed by Old Mill II LLC for Lalezarian Properties, and a specific date for the beginning of construction efforts has not been publicly revealed yet.