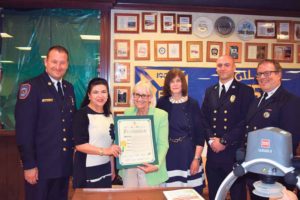 The company’s Sergeant of Arms Zachary Goldfarb was the chair of the event-planning committee and Vigilant’s EMS Week programs. Goldfarb moved to Great Neck two years ago after many years of service in another fire department.

“After I joined Vigilant, I wanted to do something to recognize EMS Week on the Great Neck peninsula,” said Goldfarb. “Chief Josh Forst and the board supported the idea, and next we formed a committee and decided on a budget. This is the first annual event, and hopefully there will be many more in future years.”

The week of May 21 to 27, 2017, has been designated as National Emergency Medical Services Week by the American College of Emergency Physicians (ACEP). First established in 1974 by President Gerald Ford, this annual observance recognizes the role of EMS in saving lives from sudden cardiac arrest and trauma, getting people to the hospitals best equipped to treat heart attacks and strokes, and setting the stage for a positive care experience—not just through medical skill, but by showing caring and compassion to patients in scary, distressing situations.

At the start of the May 24 program, Chaplain Rabbi Marim Charry acknowledged the healing work of Vigilant volunteers, many of whom are students in high school and college. He thanked them for their exceptional service to the community, as well as the sacrifices of their loved ones and families.

“By their dedication and service, the volunteers show what it means to be a true community,” said the chaplain.

Forst took the podium and gave a brief history of Vigilant’s 80 years of EMS service in Great Neck. He spoke of the growth of services to the community, and the fact that EMS volunteers have taken the place of doctors who make house calls. Very often, an EMS volunteer will give services to an individual in their home or in the ambulance, and help that individual decide whether a trip to the hospital is necessary.

Prior to 1980, only one ambulance provided medical services. In 1983, two ambulances responded to 300 calls a year, with dozens of male and female EMS volunteers. In 1988, a third ambulance was added. In 2003, then-Vigilant Chief Conrad Singer initiated a Vigilant EMS program with student volunteers from the United States Merchant Marine Academy (USMMA) in Kings Point. Since that time, the number of USMMA volunteers has grown significantly to 111. Today, Vigilant has new life-saving equipment and responds to 2,000 calls a year. According to Forst, on the day of the event, Vigilant responded to nine calls in Great Neck. At one call, an EMS volunteer resuscitated a heart attack victim and likely saved his life.

As part of EMS Week, the Vigilant planning committee visited schools throughout the Great Neck Public Schools system. Prior to the evening event, every first grader was given a Vigilant safety coloring book and emergency kit to take home as part of its new EMS for Children Day program.

In his remarks, Goldfarb stressed the importance of teaching young children the basics of emergency response. Young children have saved the lives of their loved ones numerous times because they knew how to call for emergency help.

Vigilant President Phil Katz, who joined the fire company one month before getting married, spoke of his two decades of service and shared this quote by Winston Churchill: “We make a living by what we get, but we make a life by what we give.”

Several spoke from personal experience with EMS volunteers, who helped them in their time of need. 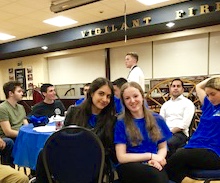 Kaplan acknowledged that, fortunately, she had never needed EMS services, but would call them in the near future, if necessary.

As he praised the volunteers, Bral’s remarks focused on his own perspective as a physician. “Doctors rely on the impressions and observations of EMS workers,” said Bral. “These are very helpful to us in treating the patient. You meet the patients first, without any preparation. You have the guts to go in raw and serve the community. Thank you.”