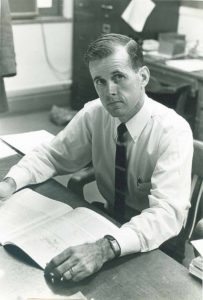 Edward S. Cassedy, Jr., a former Great Neck resident and retired professor of electrical engineering, died on Feb. 18 at his home in Woodstock. He was 89. He had suffered a long decline following complications caused by a form of hydrocephalus, according to his daughter Susannah O’Donnell.

Cassedy joined the faculty of the Polytechnic Institute of Brooklyn, now the NYU Tandon School of Engineering, in 1960, conducting research, teaching courses on electrophysics and serving as a faculty advisor. During the late 1970s, he discontinued his laboratory work and, with Peter Z. Grossman, coauthored Introduction to Energy: Resources, Technology and Society. A third edition will be published this spring.

Born in Washington, DC, on Aug. 19, 1927, Cassedy moved with his family to Silver Spring, MD, in 1937. As a child, he contracted osteomyelitis, a bacterial infection of the bone. Afflicted before the development of modern antibiotics, he underwent surgery to remove the infected marrow in his femurs and spent months at home recuperating. He often recalled sitting on the back porch of his home during this time, plinking objects floating down a backyard creek with his BB gun. Unable to participate in sports requiring running and jumping, he joined the Sea Scouts, a division of the Boy Scouts of America, and learned to sail on the Potomac River. During his teenage years, he went on weeklong summer sailing expeditions on the Chesapeake Bay with other Scouts.

Throughout much of his adulthood, Cassedy remained an avid sailor, joining the Steppingstone Sailing Club in Great Neck, where he had moved with his family in 1961. By nature a cautious man, he found a thrill in sailing on the Long Island Sound during gusty conditions, teaching his children to trim the sails to maximize speed and “hike out” to prevent capsizing. On land, he carefully tended vegetables in his community garden plot.

During the 1960s and 1970s, Cassedy became active in local politics, joining the Great Neck Human Rights Committee and serving as president of the local chapter of the Reform Democratic Association.

Cassedy retired with his wife, Bernice Herman Cassedy, to Woodstock in 2002. Until his health declined, he continued to sail, garden and work on the latest edition of his book, in addition to listening to classical music and National Public Radio broadcasts.