On the eve of International Holocaust Remembrance Day on Jan. 26, Assemblyman Anthony D’Urso traveled to a small synagogue in Naples, Italy, where he was reunited with the descendants of a Jewish family who he helped hide from the Nazis as
a little boy.

The D’Urso family protected the large Ascarelli family in their hometown of Formia, Italy, halfway between Naples and Rome, in 1944. While he was just a young child, the future assemblyman was responsible for acting as a lookout and calling out to his mother when German soldiers approached.

“For more than 25 years, I’ve been telling people about my father’s heroism and the way he kept the Ascarellis hidden from the Nazis in the woods, but few people believed me,” explained D’Urso in his speech to an audience of 500 people.

“I had no proof,” he continued. “I immigrated to the U.S. in 1950 and lost touch with the Ascarellis. Who in the world would believe that a farmer and his wife would risk their lives—and the lives of their children—and live in the woods for nine months while hiding a large Jewish family? It’s a crazy story. But, of course, the Holocaust was filled with crazy stories.”

D’Urso has been trying to locate the family since 1988. He was hopeful that his parents would be recognized as Righteous Among the Nations, a designation given to non-Jews who risked their lives to save Jews during the Holocaust, by the State of Israel and Yad Vashem, The World Holocaust Remembrance Center in Israel. But the application with Yad Vashem failed to gain traction because D’Urso lost touch with the Jewish family in the 1960s and was told they had died. He was informed that without their assistance, corroborating the D’Urso family’s involvement was nearly impossible.

But, on Dec. 19, Great Neck attorney and former prosecutor Michael Weinstock told the Great Neck Record that through extensive research, a diary describing the extraordinary risks the D’Urso family undertook to save their Jewish friends was discovered in the National Archives of Italy. Utilizing techniques he learned at the Brooklyn District Attorney’s office, along with Facebook and Google Translator to communicate with members of the Jewish community in Naples, and guidance from the staff of the Holocaust Memorial and Tolerance Center of Nassau County, Weinstock located the diary.

“It’s very surreal,” said Weinstock. “I never imagined that I would be able to do a mitzvah for a family that hid a Jewish family from the Nazis.” 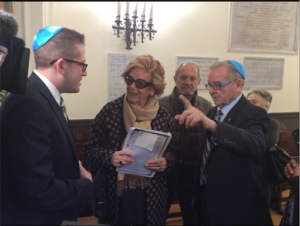 The reunion in Naples included the descendants and extended family of Tommaso Sinigallia, the Holocaust survivor who wrote the diary, which the Sinigallia family expects to publish next year. They have already invited the assemblyman and his wife to return to Naples and celebrate its publication. A copy of the diary has been submitted to Yad Vashem for authentication and D’Urso is cautiously optimistic that his parents and older siblings will soon be recognized as Righteous Among the Nations.

“It’s a very special affirmation that my father did the right thing while the whole world went crazy,” noted the assemblyman. “I’m blessed because the diary that’s been found allows me to finally spread the word about my father’s heroism. And I’m doubly blessed to spend time with so many people who are alive today, in part, because a farmer who couldn’t read or write knew what was right and what was wrong. That’s the biggest lesson of the Holocaust, of course. Right is right—even if nobody is doing it. And wrong is wrong—even if everybody is doing it.”

A strong possibility exists that D’Urso will receive this extraordinary designation, as well. If Yad Vashem does approve his status, D’Urso will be the first elected official in the United States to be recognized with the title and will receive honorary Israeli citizenship.

“It’s going to be quite emotional to meet all the family members,” said D’Urso before the event. “I’m hoping that I don’t get too emotional while I’m speaking.” 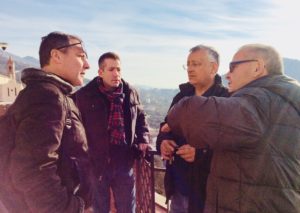 The assemblyman wept openly when he hugged Ester Sinigallia, a daughter of the family that was hidden. Later, she told him, “I came here to thank you.”

After wiping away tears, he responded, “You don’t need to thank me. It’s a pleasure to finally meet you. I came for the hugs, not a thank you.”

D’Urso concluded his speech by saying, “I want to thank the relatives of Emilio Ascarelli who traveled here from around Italy to spend time with me and listen to me kvell about my parents. You’ve made me feel truly blessed. And, if you don’t know the word kvell, it’s because you’re not from New York. It means ‘to brag’—and it’s Yiddish.”