She crossed the finish line hand-in-hand with fellow Great Neck runner Graham Wilcock, who placed fourth overall in the marathon. Delgado finished the 26.2-mile distance in three hours, 25 minutes and 12 seconds. Her finish was nearly six minutes ahead of the second-place female finisher and earned her fifth overall in the marathon race. Wilcock’s official time bested Delgado’s by four tenths of a second. 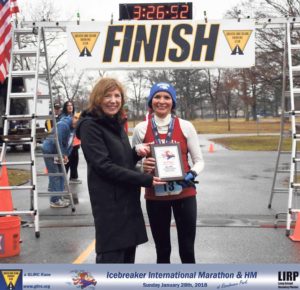 The Icebreaker International is held as the North American venue for Marathon Adventures’ Triple 7 Quest, involving seven marathons or seven half marathons on seven continents in seven days. Each year a dozen or so runners from all over the world come to Eisenhower Park to complete the North American leg of this feat.