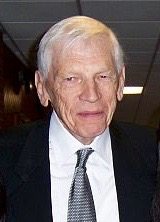 He said that he was retiring almost 11 years ago, but he never really has.

It’s hard to believe that so much time has passed since Dr. William Shine retired as superintendent of the Great Neck Schools, but Dr. Shine, who served the community for almost 23 years in that role, remains very active in public education.

But he’s not too busy that he can’t find the time to be among the many honored guests at the celebration of the school district’s 200th year this Sunday afternoon on the William A. Shine South High School campus that bears his name.

In fact, he’s very much looking forward to it. “I’m going to be celebrating along with the rest of the community,” said the former superintendent of Great Neck from 1982 to 2004.

“It’s a privilege to be part of it,” he said of the upcoming ceremonies and his career in Great Neck. “It’s been a big part of my life.”

When he first left the Great Neck system in the summer of 2004 he took on pro bono work with the NYU Child Center, but that didn’t last too long. A phone call from the Manhasset schools led to a job as their interim superintendent in April of 2005.

After Charles Cardillo was selected to head Manhasset in November, Dr. Shine wound up staying there as his assistant until 2011. Then the Roosevelt Schools asked Dr. Shine to be their state authorized “outside educational expert,” a job he’s held for the last three years.

“It’s not a full-time job,” Dr. Shine said,” but at times it is.” He says that he works with Roosevelt about 60 days a year.

“I retired from the superintendency because I felt 22 years was long enough for a district to have a superintendent,” he recalled. “They needed some fresh ideas. People could finish the sentence when I started it. I just thought it was time for them to have another inside look.”

“The last day was not a happy day,” he added. “It was very hard personally for me to do that. But it was the right thing to do.” Ron Friedman took over for Dr. Shine who was followed by Tom Dolan, who is retiring in July.

Dr. Teresa Prendergast will become Great Neck’s next superintendent, the 11th since Elise Gignoux first served in 1922. Dr. Shine holds the distinction of being the second longest in service behind John L. Miller who was in office from 1942-1970. Great Neck North High, of course, bears Miller’s name.

There have been many changes, shifts and controversies in public education in the years after Dr. Shine left Great Neck. His duties in Manhasset and Roosevelt have kept him acutely current.

“I’m in Albany now more than I’ve ever been in my life,” said Dr. Shine, who still lives in Great Neck Plaza with his wife of 30 years, Susan, who is retired from her position as an arts administrator at the Caramoor Center for Music and The Arts in Westchester.

“I go to meetings in Albany to learn how to conduct school reviews and to get the latest information on testing and assessments and common core,” he explained. “I’ve really been immersed in the common core for the past three years.”

According to Dr. Shine, the common core has straightened out confusion that had long existed about math. “Finally there is a common core math curriculum with standards which seem to be reasonable and seem to emphasize an understanding of math,” he said.

Dr. Shine was asked for his thoughts about the current arguments going on about testing and having children opt out of the program.

“The assessment of common core unfortunately is a political abomination of that curriculum.“

“My first principal’s job was in 1954 in Tabernacle, New Jersey, so I’ve seen a few teachers,” Dr. Shine said about the teacher evaluation controversy. “I would say that very, very few teachers in my experience were ineffective. Most of the teachers that I knew affected positively the lives of students. The trouble is that the whole teaching profession has been brutalized by the ham-handed political process.”

“My decision to retire at the age of 76 from Great Neck was because I was 76 and I thought it was time to retire,” he said, philosophically.

“I didn’t think that I had 10 more good years. However, it was still the right decision to make.”

“It was the right decision for me and for the district.”