Dr. Ruth Westheimer shares her wisdom—and her past

Lucky attendees of the Gold Coast International Film Festival’s screening of Ask Dr. Ruth witnessed the brilliance, courage and drive of America’s most famous sex therapist during a live Q&A with Dr. Ruth Westheimer at Great Neck Squire Cinemas on Wednesday, May 8.

“There’s no such thing as normal,” said the petite nonagenarian Holocaust survivor, whose uninhibited approach to sex therapy and education transformed the conversation around sexuality, promising “the best sex you’ve ever had,” if you listened to her.

A private prescreening reception was held at Rothchilds Coffee and Kitchen, where guests had an opportunity to take photographs with Dr. Ruth and the chance to have her autograph Roller-coaster Grandma: The Amazing Story of Dr. Ruth, one of the nearly 50 books she’s written. 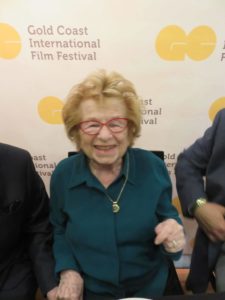 The 100-minute documentary by Ryan White chronicles Dr. Ruth’s incredible life, capturing her exuberant and witty personality. At almost 91, she still lives life to its fullest, perhaps in spite of her tragic beginnings.

“At 90, I’m still talking about sex,” said Dr. Ruth in her signature thick German accent. “With all I’ve been through, I have an obligation to live large in this world.” 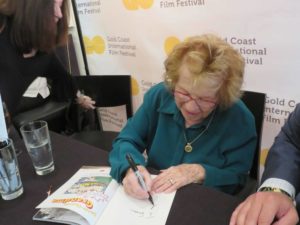 A household name in the 1980s and ’90s, her infectious energy is illuminated in the film through clips of radio, TV, commercials and major motion picture appearances, interspersed with anecdotes shared by her family, longtime friends and colleagues, along with vintage photos and hand-painted illustrations that bring her childhood as an orphan of the Holocaust to life.

Born in Germany in 1928, Dr. Ruth was sent to a children’s home in Switzerland at age 10 to escape the Nazis. When girls weren’t permitted to continue their education past eighth grade, Dr. Ruth’s thirst for knowledge was sated by a male friend, who would sleep under her bed at night while she read his school books.

At 17, she immigrated to Palestine, where she fought for the country’s independence as a member of the Haganah, the Jewish freedom fighters. She then studied at the Sorbonne and taught kindergarten in Paris, prior to sailing to the U.S. in 1956, where she obtained a master’s in Sociology from the New School of Social Research and a Doctorate of Education in the Interdisciplinary Study of the Family from Columbia University Teacher’s College when she was 45.

The documentary revisited her painful past and unlikely path to a career as a psychosexual therapist who pioneered discussing sexual matters frankly on radio with her program, Sexually Speaking. The call-in show began in September 1980 as a 15-minute taped segment that aired on WYNY-FM (NBC) in New York after midnight on Sundays to fulfill the radio station’s requirement for educational programming. It became so popular that one year later, Dr. Ruth answered questions from listeners on a live, one-hour program airing at 10 p.m., and entertained many New Yorkers during their drive home from weekends in the Hamptons.

The unstoppable Dr. Ruth expanded her reach by sharing her expertise through television, books, newspapers, games, home video, computer software, as well as on her website, www.drruth.com, and on Twitter at AskDrRuth. She even launched her own line of low-alcohol wines, Dr. Ruth’s Vin D’amour, and shows no sign of slowing down as she still teaches at her alma mater, Columbia’s Teachers College, and Hunter College and continues to lecture worldwide.

There’s even a play about her life, Becoming Dr. Ruth; a calendar, Dr. Ruth’s Good Sex Night-to-Night Calendar; and a board game, Dr. Ruth’s Game of Good Sex. She’s also on the board of the Museum of Jewish Heritage and encourages everyone to see the Auschwitz exhibit currently on display. 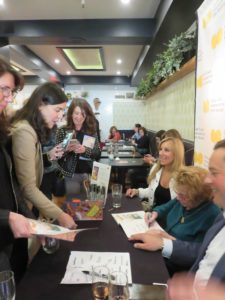 Like any good Jewish mother and grandmother, Dr. Ruth kvelled over her grandchildren and repeatedly inquired throughout the film to make sure those around her, including her drivers, had eaten. Despite her fame, she’s lived in the same New York City apartment for 50 years, because that’s her home. Losing her own parents so young, her two children and four grandchildren hold a very special place in her heart.