The North Shore Hebrew Academy (NSHA) Middle School Megillah Readers Program (Book of Esther), initiated two decades ago by Great Neck Estates resident Dr. Paul Brody, was named in his honor. In addition, NSHA recently purchased a beautiful Megillah before the Purim holiday, in March 2022-and named it, as well, in honor of Dr. Paul Brody-to be used by each student reader on Purim Day. The naming of the Megillah Readers Program was announced by Rabbi Dr. Jeffrey Kobrin, Rosh HaYeshiva and Head of School at the Middle School Graduation Exercises, held at the Great Neck Synagogue (GNS) Main Sanctuary, on June 15, 2022.

Dr. Brody, a dermatologist by profession, has instructed approximately 400 students—both Ashkenazi and Sephardic—beginning with only eight students in 2002. This year’s group included 35 students of 39 eighth-graders and two seventh-graders.
As a result of Dr. Brody’s initiative, the entire NSHA Middle School participates in a student-led Megillah reading, attended by their parents, grandparents, siblings and faculty, on Purim Day, even when it falls on a Sunday.

Dr. Brody himself has chanted the Megillah for 50 years, including 28 years at the Great Neck Synagogue. In 1985, while smuggling Judaica to Jewish “refuseniks,” he read the Megillah illegally at the Great Synagogue of Leningrad, at great peril. “Better re(a)d than Dead,” he figured!
A detailed proclamation declaring June 15 as “Dr. Paul Brody Megillah Readers Day,” in “fitting recognition and heartfelt appreciation for the dedicated service of Dr. Paul Brody to the residents of Nassau County,” was issued by Nassau County Executive Bruce Blakeman. A Proclamation was also issued by NYS Comptroller Thomas P. DiNapoli to Dr. Brody for his major accomplishments and honors. 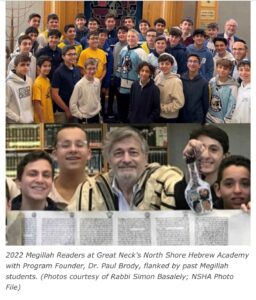