It’s wonderful how innocent and trusting little children are. We mustn’t spoil the innocence of their early childhood—allow them to retain this delightful part of growing up as long as possible. There are times, though, that the truth must be exposed because there is no other choice.

My son’s family has an annual Christmas Eve and Christmas Day celebration for the immediate family. My daughter-in law grew up in the south and enjoys this lovely holiday—she goes all out.

When the grandchildren were small and the holidays arrived, they were so excited that they could barely contain themselves. Jumping up and down, they giggled incessantly. They believed in Santa Claus. On Christmas Eve, their stockings were hung by the fireplace. A glass of milk and cookies were placed at the hearth, waiting for Santa’s arrival. It looked like a magazine spread.

They believed, as they were told, that Santa came down the chimney and deposited their presents around the tree. He left by going back up the chimney, and then went to other children’s homes.

As the children slept, my son would spend the entire evening putting toys together and placing batteries in everything that moved.

One Christmas Eve, I noticed my grandson in his pajamas with the flap of his bottoms hanging down and his red hat with the white pom-pom on top of his head bobbing up and down as he ran back and forth between two fireplaces—one in the living room and one in the family room. His head was twisted looking up the chimney. 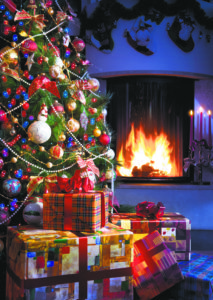 He had a quizzical expression on his face, I could see he was questioning how Santa could get through that small opening with his big bag of toys. He was puzzled, but he never asked about it. He wanted to believe. He and his sister would try to stay up all night to see if the milk and cookies were gone.

It was lovely to share their innocence in a world so cynical and cruel. Then, came the beginning of the end for Jacob. He started to doubt. He was growing up. My daughter-in-law felt that it was time to tell him the truth. She admitted that there was no Santa Claus—his parents were the bearers of the gifts.

Jake was upset. He felt betrayed. His sister, Mallory, was less angry. She suspected the truth for quite a while, but never let on to her brother. She was older and didn’t want to spoil his fun. I was surprised that he took this news to heart. I thought he figured it out a few years before this revelation came to light.

Of course, Jacob got over his disenchantment, but Christmas was never the same. Reality had reared its ugly head. I, for one, miss those shining eyes—the excitement generated by the anticipation of Santa, the expectation of presents forthcoming.

It’s a small event in the scheme of things, but the sweet innocence is what I miss. There is so little trust left for us to behold. We still do the Christmas thing. The exchange of presents are less numerous than in years past. My son still makes his famous pancakes. Jacob is shaving now, and what he wants most is some high-tech gadget that I do not understand. So long, train and erector sets. His new shiny-eyed look is computer driven. His fascination with the stars and scientific questions are now driving his excitement.

Time marches on, and so do we. But, I still think we could do with a little Santa.