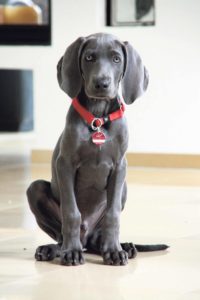 The problem with holiday parties is that an unknown element might arise, which can diminish the pleasures of a family gathering. While I am not a dog owner, I do enjoy them—most of the time. But, in my opinion, the place where dogs do not belong is at dinner-party tables.

At their Seder this year, the host and hostess had the pleasure of two canine guests—their own lovable black Lab named Lulu, and then there was Zephyr, a 40-pound gray Weimaraner puppy who is a dead ringer for William Wegman’s photo portraits of his subjects dressed in various costumes. Zephyr made an entrance, snout first, straining at his collar with my niece dragging behind him by his leash. I knew we were in trouble with a capital T.

By way of apology, my niece exclaimed as she was propelled into the room, “We can’t leave him home, he’s still a baby.” No one dared to object, after all their four family members could surely contain this long-legged gray puppy with the piercing eyes. Poor Lulu, the black Lab, a member of the hosts’ family and adored queen of the household, didn’t appreciate a younger intruder into her realm. At 10 years old, Lulu is long in the tooth, with graying hair around her muzzle.

Zephyr continued lunging forward, dragging his master into the living room, scratching up the wood floors with his puppy nails. My niece and her group took turns trying to restrain their baby to no avail—he was out of control. At intervals of barks and drools, treats were jettisoned from their stash as they were claiming, “He’s just a puppy.”

The Seder was about to begin. Zephyr, curiously named after the Greek god of the west wind, was put into his dog cage facing the dinner table in order to keep him busy and able to see what was going on. Hopefully this would calm him down. Lulu quietly squatted under the table cloth in the ready for the food to be served. She was waiting to pounce on some crumbs dropped by the guests.

When the reading of the Haggadah began, Zephyr punctuated each sentence with a loud bark. We tried to ignore the barks—after all, he was just a puppy. The members of his family jumped up and down trying to keep him quiet, with no luck. More treats didn’t do it. The crunching sounds filled the room as he devoured them. Dog toys were lobbed into the cage to keep him quiet. The frenzied sound of him tearing at the stuffed snake, looking for the squeaker, impelled readers to raise the volume of their voices to overcome the noise of the scraping and growling from the cage.

Lulu decided that waiting for some treat to fall off the table was not worth the annoyance. Her disdain for her fellow creature was apparent. She appeared from under the table and soulfully descended the stairs to her quiet haven. Good for her. We weren’t that lucky.

The room finally quieted down. Zephyr took a hiatus and was still; we were able to enjoy our delicious dinner. Little did we know, she was waiting for the second round.

Everyone rose from the table after the last portion of the book was completed. With that, Zephyr imagined he heard the sound of the bell and leapt out of the corner of the cage, ready for action. He spied Lulu’s toys in a basket on the floor off the living room and immediately charged a stuffed skunk, trying to tear it apart. “He’s just playing,” said my nephew. Next came the squirrel, a favorite of Lulu’s. Nothing was sacred. Lulu’s toys were under siege; Zephyr went through them like a west wind, his namesake. There was no escape—growling, chewing and a snake whopping the floor overtook the adults’ conversation. We gave up and simply watched.

My niece finally capitulated and got their coats, ready to leave. She was exhausted. When they left, after pushing Zephyr into the back seat, he collapsed into a sound sleep, worn out by his shenanigans.

When the door closed, we had dessert and coffee in peace. No one criticized or made remarks—after all, he was just a puppy and this was family. Next year, maybe he will be older and calmer. Maybe they won’t bring him. Maybe they will give him a dog tranquilizer in his treats. Maybe!