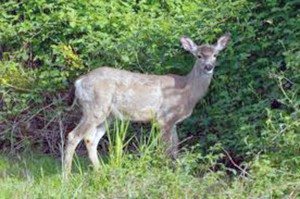 Now that the warm, sunny spring weather has arrived in Great Neck, it also seems that some so-called “wild animals” are back too. And while chatter about possible coyote sightings in the area are occasionally heard, it is the supposedly non-threatening deer sightings that have once again begun to crop up. Along with often spotted red fox, the white-tailed deer do wander in to Great Neck.

Deer in Great Neck were first spotted five years ago, in May of 2010, when a deer was discovered wandering along North Station Road in Great Neck Plaza. Oddly enough, the deer was caught apparently attempting to enter a bank. An employee of another near-by business was astonished to see the young buck and called the police, who were on the quickly on the scene. At that time the frightened deer was injured, possibly from his travels, and the police emergency service personnel managed to capture him. Unfortunately, according to the Department of Environmental Conservation (DEC), the deer was seriously injured and had to be euthanized.

No one seems to be certain if the deer occasionally spotted in the community actually live in Great Neck, but, for sure, they do visit. Just a few years ago, again in the spring, a deer was captured on camera in Saddle Rock, the photo sent to the Great Neck Record thanks to Saddle Rock Mayor Dan Levy. Following this sighting, deer were also spotted wandering through Kensington and in Russell Gardens, then in University Gardens. No one really knows if one deer was making the rounds of Great Neck or if there really were several deer touring the peninsula.

Following that incident, and at times since then, reports have surfaced that one or two other “deer sightings” had occurred in Kings Point. At that time there was speculation that the deer could have swam across from Westchester or City Island, as deer are reportedly strong swimmers. Research indicated that the DEC does report that deer can swim: “Deer can swim, can run up to 35 to 40 miles per hour and can jump over and eight-foot high fence.” And the DEC also reports that the deer seen in Great Neck, the white-tailed deer, are found throughout New York State.

And over the years The New York Times has reported that “Deer are occasionally spotted in Alley Pond in Queens” and other online sources report sightings of such deer along the Cross Island Parkway, near Alley Pond. The U.S. Fish and Wildlife Service, a bureau of the federal government under the Department of Interior, has also told the Record that there is actually a small herd of white-tailed deer in the wooded area right across from Alley Pond.

With so many deer sightings in Great Neck back then, the Record also looked for some information from Town of North Hempstead Public Safety Commissioner Andrew DeMartin. At that time (two years ago), DeMartin had told the Record that a deer had been spotted in the town’s Clinton G. Martin Park in New Hyde Park. DeMartin speculated that this lone four-point buck might have been brought here by a resident who could no longer care for the wildlife. Since the deer was on town property, the town was responsible, but the deer disappeared before any action could be taken.

Today, with (indigenous) red fox roaming the roads in Great Neck and the new concern regarding possible (but unconfirmed) coyote sightings, seeing a deer suddenly appear in the neighborhood does not appear to cause any anxiety nor fear.