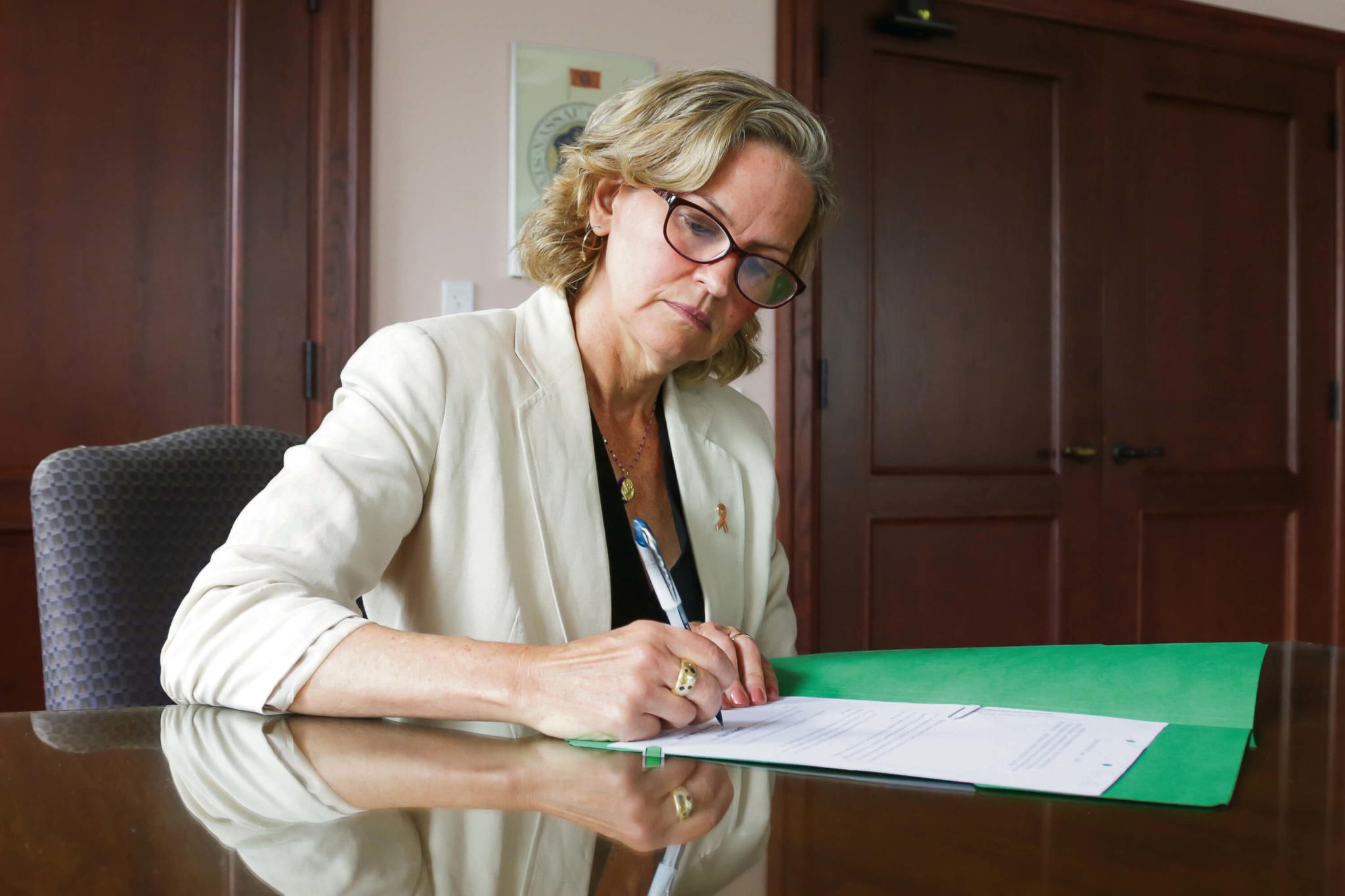 On Wednesday, Oct. 2, Nassau County Executive Laura Curran vetoed a package of six pieces of legislation affecting the countywide reassessment that the legislature’s Republican majority passed the week before.

The legislative bundle, which the Republicans termed the “Assessment Bill of Rights,” passed 11-8 along party lines on Sept. 23. It included measures that would limit Curran’s involvement in the assessment and require current assessor and Queens resident David Moog to live in Nassau County. The laws also would require the Department of Assessment (DOA) to have a live person answering the phone during work hours to answer any questions, require the assessor to hold hearings in every town explaining the assessment process and prevent inspectors of the department from evaluating portions of properties that would not be subject to a tax challenge.

“The Assessment Bill of Rights includes a package of measures developed to address residents’ concerns with the reassessment process,” Presiding Officer Richard Nicolello (R-New Hyde Park) said when the package passed. “The bills will make the assessment process more open and transparent and will provide accountability to the office of the assessor. Our job as elected officials is to make this process easy, straightforward and fair for the residents of this county. The majority caucus is prepared to do everything in our power to make that a reality.”

The county executive told the Great Neck Record she believes the Republicans are acting in bad faith to hurt their opponents in the upcoming Nov. 5 elections across Nassau, which involves all 19 seats on the county legislature, as well as supervisor and other important administrative positions within each of the county’s towns.

“They are trying to stoke anxiety because of the election coming up,” Curran said. “I think that people will see through it because this is the same crew that did absolutely nothing and sat mute while the system was decimated. Now that we’re on the road to accuracy and fairness they’re suddenly doing this flurry of legislation that’s quite meaningless.”

Curran noted her administration has held many informative public meetings on the reassessment in communities across the county since it was first announced.

“We’ve had tons of meeting, and I’m getting to any many as I possibly can,” she said. “Now, we’re doing a bunch of tax exemption meetings. Our staff is there, we work with people one on one and answer their questions. We are out there.”

She took particular umbridge with the provision that Moog must live in Nassau County, seeing it as a point that should have come up during his confirmation process if Republicans had truly opposed it on principal.

“The legislature unanimously approved Moog 19-0, and they had his whole resume,” Curran said. “They knew where he lived, but now all of a sudden he has to live in Nassau? That’s just one example of why this is bogus.”

Curran’s administration has attempted to restart the process for property assessment following nearly a decade of frozen rolls under former Republican executive Edward Mangano that county Democrats say made a mess of property values and taxes throughout Nassau.

“For years the Republicans were complicit in the Mangano administration’s corruption of the tax rolls, now they are trying to blame everyone but themselves,” Abrahams said in a press release. “They should stop the dishonest fear-based politics and pass the Taxpayer Protection Plan to give real protections to taxpayers.”

Republicans, in turn, have accused the reassessment process of unfairly burdening taxpayers, and have lobbied criticism at both Curran and Moog for what they see as a lack of transparency in the process.

Legislator Rose Marie Walker, who represents Old Bethpage, was among the key Republicans who worked on this series of bills.

Legislator Ellen Birnbaum (D-Great Neck) criticized what she sees as hypocrisy in the Republican’s efforts to discredit and sabotage Moog’s work of repairing a broken assessment system.

“Under the previous administration, members of the majority caucus stood by silently while an unqualified acting assessor held the position,” Birnbaum said. “Now that we have a well-qualified, experienced assessor who is rebuilding a department that had been previously decimated, the majority has suddenly become determined to micromanage and undermine his efforts and the important work of the department.”

Following the announcement of Curran’s veto, Nicolello said county Republicans will work to get the veto overturned, which would require two Democrats to flip their original “no” votes on the Assessment Bill of Rights to reach the 13 needed.

The next full meeting of the county legislature when a vote on overturning Curran’s veto could theoretically be held is Monday, Oct. 28 at 1 p.m.