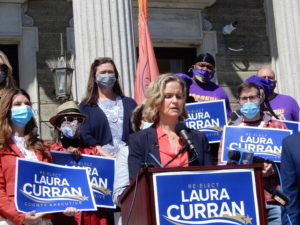 County Executive Laura Curran made it official on May 11, launching her reelection campaign in front of the Theodore Roosevelt Executive and Legislative Building in Mineola.

In her remarks, Curran stated, “After running for and serving on my school board and then the county legislature, I saw a real problem here in Nassau County: Our elected officials were taking our trust for granted, betraying the faith we put in them and putting themselves ahead of our taxpayers. We all witnessed the results of a culture of corruption and we were all left footing the bill. I decided to step up and do something about it. I wanted our county government to live up to the hardworking people who call Nassau home. That’s why I ran and that’s how I’ve governed.”

Curran never mentioned her Republican predecessor, Ed Mangano, by name. Mangano was indicted by the federal government in October 2016, and after a second trial was convicted of several charges, including conspiracy to commit federal program bribery and conspiracy to obstruct justice in March 2019. His wife Linda was also found guilty and the couple is awaiting sentencing while seeking a new trial.

Curran, then in her first year as county legislator, narrowly defeated Republican Jack Martins in 2017 to become the first woman county executive.

In addition to anti-corruption measures related to campaign donations, the county executive also took credit for fixing what she called the county’s financial mismanagement. She cited budget surpluses as well as a positive bond rating, the first in 15 years, according to Curran. She also took on property valuation, doing a reassessment after Mangano froze the rolls early in his first term.

In addition, Curran touted the county being named the safest community in America by US News & World Report and credited the county’s law enforcement.

It was good record to run on, Curran affirmed, but COVID-19 changed everything.

“County government is where the rubber meets the road,” she said. “Our incredible workforce all took on the task in a herculean way. This crisis didn’t create our heroes—it revealed them.”

She spoke of the various ways her administration helped first responders and local businesses, opening testing centers and later operating vaccination clinics. She was proud that Nassau ranked first among large counties, with about 71 percent of its adults receiving at least one dose.

Curran said she hoped that the recovery would lead to better things and not just a return to normal, reminding her audience that she ran because “the status quo wasn’t cutting it.”“In the next four years, we have the opportunity to invest in the long term economic sustainability and resilience of Nassau County,” she pledged. “Let’s get thousands of people back to work while investing in Nassau’s future. Infrastructure is at the heart of our recovery efforts—and those efforts are well underway by my administration.”
She concluded, “I will fight to preserve and strengthen the services and quality of life the people of Nassau deserve. With your support, we will continue to lead through it all and write Nassau County’s next chapter together.”

Bruce Blakeman called himself a Republican with an independent streak. He was first elected to the Town of Hempstead Town Board in 1993 and later returned, serving since 2015. From 1996-99 he was the presiding officer of the then-new county legislature, which replaced the board of supervisors that governed the county.

Asked why he wanted to run, Blakeman immediately cited “the botched tax reassessment that the county executive has implemented, it’s important that we have somebody who will taxation from a conservative basis. Someone who will do it fairly. And someone who will be transparent about the issue. It’s unfair, and it resulted in two-thirds of the county residents getting a massive tax hike. It’s a major issue and one of the reasons why I’m running is to fix the problem that she’s created.”

Blakeman was referring to a widely cited Newsday study that found that Curran’s reassessment had resulted in 65 percent of homeowners seeing their school taxes rise, while 35 percent saw a drop in their tax bills.

Asked for his platform, he replied, “Keeping taxes low is the number one priority, because people can’t afford to live here anymore. And with the state government increasing state taxes, we on the local level have to keep taxes down. Controlling government spending. Fixing the reassessment fiasco that was foisted upon the taxpayers. Economic development. Job creation. Increasing the tax base—that’s one way to keep the taxes down.”

He concluded, “So I have the experience in the public and private sectors that Laura has never had. And I have a vision of where I want to take the county. I want the county to be a vibrant place where people want to move to and not move out, and where businesses want to relocate to create economic prosperity. That’s my pitch.”

“He’s full of excitement and enthusiasm. He’s experienced. He wants it. He’s working very hard,” County Republican Chair Joseph Cairo said of his candidate, adding that people will vote on the assessment fallout. “We’re going to have a good Republican year come this November.” 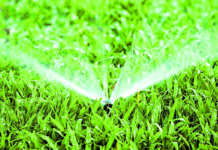