Student campers at the Gold Coast Arts Center Summer Camp showcased their artistic and creative talents through both a live musical performance and a ceramics show in front of a large audience of parents, siblings and community supporters on Friday, July 20.

During the previous two weeks, campers, ages 6 through 14, participated in either musical theater camp or ceramics camp, respectively rehearsing their rendition of Broadway’s greatest hits for a live performance and crafting their ceramics pieces for an art show.

“The students learned how to work as a team, whether it be learning the choreography for a dance or perfecting their glazing skills for ceramics,” said Amy Hariton, director of the Gold Coast Arts Center Summer Camp. “Both groups of students came in every day ready to perform and work.”

Those who signed up for ceramics camp created everything from artistic mirrors to colorful bowls to aquatic scenes of sharks and mermaids over the course of two weeks. Many campers sculpted, glazed and textured up to 10 ceramic pieces, acquiring knowledge about ceramic techniques and equipment. Campers also had the opportunity to work on the potter’s wheel and roll out their own clay on a slab roller.

“It’s always an amazing two weeks,” said Jude Amsel, ceramics instructor for more than 25 years, who helped found the arts center. “The campers improve so much from the first day they walk in to the last day when they all showcase their pieces.” 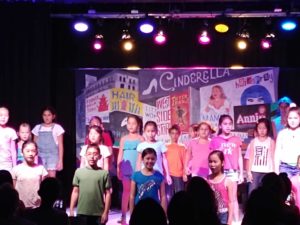 Even though ceramics “has such a great margin for error,” Amsel felt that the campers became much more confident with each piece. They became more detailed with their work and better appreciated this art form, enthusiastically showing off their pieces to parents and community residents.

Musical theater campers also greatly improved over the two weeks of rehearsal time; at first apprehensive about even opening their mouths to sing, participants developed into fearless actors and actresses who lived and breathed the parts. Drama and music teachers Megan Clancy and Darya Gauthier chose the selection of contemporary and theatrical hit songs, taught daily voice and dance lessons, and helped campers familiarize themselves with performing on stage.

“The students learn how to harmonize together and how to cooperate on stage to best recreate these characters and artists,” Hariton said. 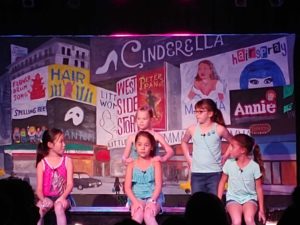 Similar to the ceramics campers, those in musical theater showcased their creativity through performing on stage with little stage fright. All campers actively participated during rehearsals and quickly learned their parts, ensuring them success in front of an audience. Clancy and Gauthier both agreed that the final performance could not have gone any better, the campers remembering all their lines and performing all the choreography to the best of their abilities.

For the next few weeks, the camp will offer other weeklong programs like cartooning, 3D art, chess, dance and a new course called Vocal Expressions. Many of these programs culminate in a performance or art show similar to these two showcases. But with a successful start, the camp is ready for a fantastic rest of the summer.

“I wouldn’t change a thing for the rest of the summer,” Hariton said. “The kids are so precious and hardworking, and I want to continue to give them a chance to shine.”

I never thought I’d be pushed to write this letter

I never thought I’d be pushed to write this letter