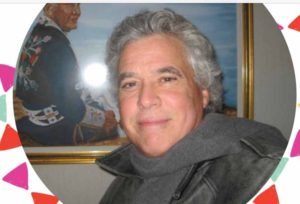 This retired art teacher shares his talent with the community

Every year, Great Neck South High School hosts a senior party for the graduating class. The elaborate evening offers music, dancing and food for the students to enjoy before going off and starting a new chapter in their lives. Each year holds a different twist, and retired Lynbrook art teacher and Great Neck resident Marvin Anchin has been creating massive themed sculptures for the event since 2000.

Marvin Anchin is a creator, artist, designer and inventor. He uses his own papier–mâché technique to make these wild, out-of-the-box creations—and parents, teachers, faculty and the community look forward to them.

Each year, the sculptures are made in a historic landmark building called the Wiles House, which existed during George Washington’s time. The many rooms in this enormous home are utilized for senior events as well.

Anchin didn’t always know that he wanted to become an art teacher. Ever since he was a young boy, his mother told him that she knew he was skilled at sculpting.

“My mom said I used to take things like peanuts and stick toothpicks in them and make sculptures out of them when I was a little kid,” says Anchin. “It was never-ending.”

Even after college, Anchin was determined that he would become a famous artist. But, his mother steered him in another direction that he says saved his life. “Right before I got my master’s degree in art education, I said I wanted to be a famous artist in 10 years. My mom laughed and said, ‘You might want a career and a backup just in case,’” says Anchin.
“I finally got my master’s in Art Education K–12 and was certified.”

This passionate teacher saw the artist in each student. He believed that everyone was capable of doing great things.

“My own belief is that every kid that I taught should walk away with great self-respect and a good feeling about themselves,” says Anchin. “Math and science might be hard for somebody, and then I’d get them and it was like wow, they did something great today.”

Art can be taught to young children in many different ways. Anchin educated his students using the same skills that Leonardo da Vinci or Rembrandt used in their work and which they, in turn, taught their students.

“I did not teach ‘arts and crafts.’ I taught the real art,” says Anchin. “They learned to draw, to paint, to sculpt. I designed projects for my middle-school and high-school students in order to incorporate the skills they could use to become real fine artists. Just watching what they would produce was great.”

For Anchin, working with the Great Neck South community doesn’t feel like work to him at all. It is his passion.

His daughters attended Great Neck South High School, which is how he began helping with the senior parties. When his older daughter was a senior in 2000, the parents who were organizing the party knew he was an artist and asked for his assistance. The rest is history.

Every senior party has a different theme selected by parents, which means a new sculpture for Anchin. He has created a life-size dinosaur, characters from The Wizard of Oz, Men in Black and Willy Wonka & the Chocolate Factory, animals, a jumping tiger—even a full-size elephant.

“Sometimes I have created the piece, and then they use that as the theme,” says Anchin. “I want them to feel the process. The parents really love it. So the inspiration is the theme. It’s such fun.”

This year, to go along with the Governors Ball theme, Anchin created a Statue of Liberty that was made from thousand-foot rolls of tape from Costco and endless amounts of tin foil. Many people helped with this creation because the structure was so large. An engineer, two carpenters and a construction expert were all present to make sure that the 23-foot upright Statue of Liberty arm would be structurally sound and stable. He even used his teaching skills so the parents could help with the papier–mâché.

But Anchin is looking to give even more this year. He would like to donate the Statue of Liberty to a company, educational institution, town park, facility or even the military. If you are interested in receiving this masterpiece, please submit a note to sarbitaljacoby@antonmediagroup.com, explaining why your organization deserves this sculpture. Anchin’s creation could enlighten your world!